How to make easy and delicious soy-free vegan sausages using vital wheat gluten and a handful of basic pantry ingredients. 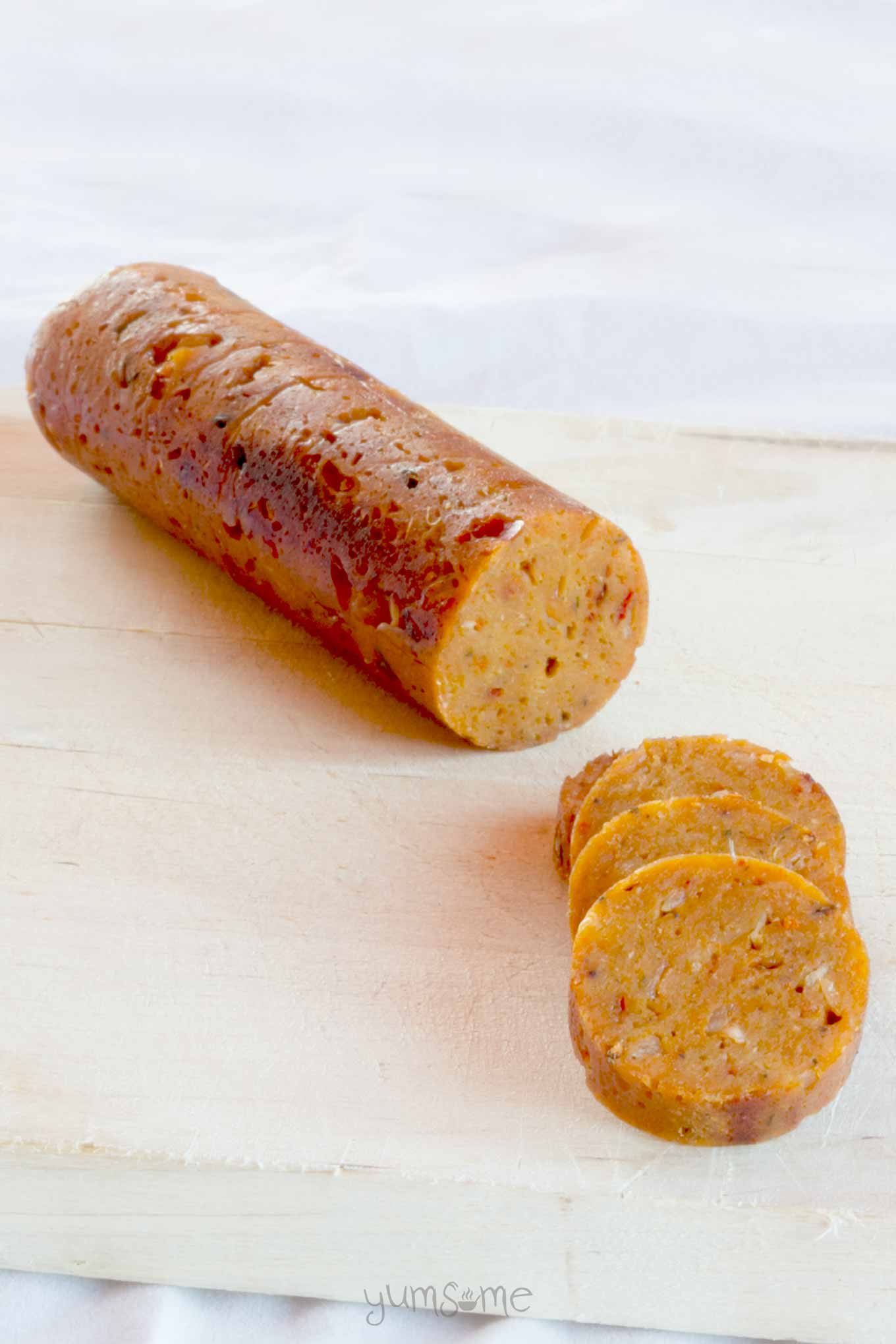 Moist, firm & full of flavour, my vegan sausages are better than anything you can buy in the shops! I make them the day before I’m planning to use them but if you’re pushed for time, you could get away with refrigerating them for just five hours.

When we lived in Thailand, there were sai oua (sausage) sellers everywhere, and many was the time I mused that if I ate meat, I would probably live on them. Not that I ever tried any but if the smell was anything to go by… Let’s just say that my tummy rumbled an awful lot when the food carts came out in the evenings!

Fortunately, I did find a few jay (vegan) street carts and cafés, where they sold suitable sausages. Sai oua, that is, not Western-style vegan sausages. They were every bit as good as I imagined their meaty counterparts to be. I ate rather a lot!

What are vegan sausages made of?

These ones are made from vital wheat gluten, which is the protein left after the starch has been removed from wheat flour. Vital wheat gluten is used to strengthen flour for bread-making, and also to make plant-based meat, known variously as seitan, mianjin, and wheat-meat.

Seitan has been made in Asia for centuries, and is well-known in Buddhist culture, where meat-eating is not always a thing. If you've seen tins of mock duck or mock chicken in Chinese supermarkets, you'll be familiar with at least a couple of its uses.

One of the great things about living in SE Asia was the abundance of seitan, especially in George Town, Penang (Malaysia), where there's a huge Chinese community. If you're ever in the area, I highly recommend Lily's Vegetarian Kitchen, where you'll find a veritable feast of seitan dishes!

How to make vegan sausages

It's really easy to make vegan sausages. First you need to blend all the wet ingredients (I use my VAC2), then mix them well with the dry ingredients (the vital wheat gluten, etc.) in a large bowl, until you have a dough.

Knead the dough, then set aside for a few minutes to rest. While it's resting, tear off eight sheets of aluminium foil (about 30cm / 12" long).

When you're ready to make the sausages, divide the dough into eight equal pieces. Take one piece, roll it into a rough sausage shape, and then plonk it onto a piece of foil, close to the edge. Roll it up tightly, and twist the ends closed. Don't worry about making the dough neat - it will expand as it's cooking. It will fill the foil, and come out perfect!

Once you've done the same for the remaining seven pieces of dough, place into a steamer, and cook for 40 minutes. When the sausages are done, remove from the steamer, and set aside to cool before placing in the fridge for a few hours to firm up.

Do I need to do anything else?

If you plan to use the sausages as an ingredient in, for example, a casserole or tagine, then no, they can just be cut up and used as is. If you'd like to serve them in their own right however, then gently warm and brown them in a skillet before serving.

Don't microwave them though - they can go hard very quickly! 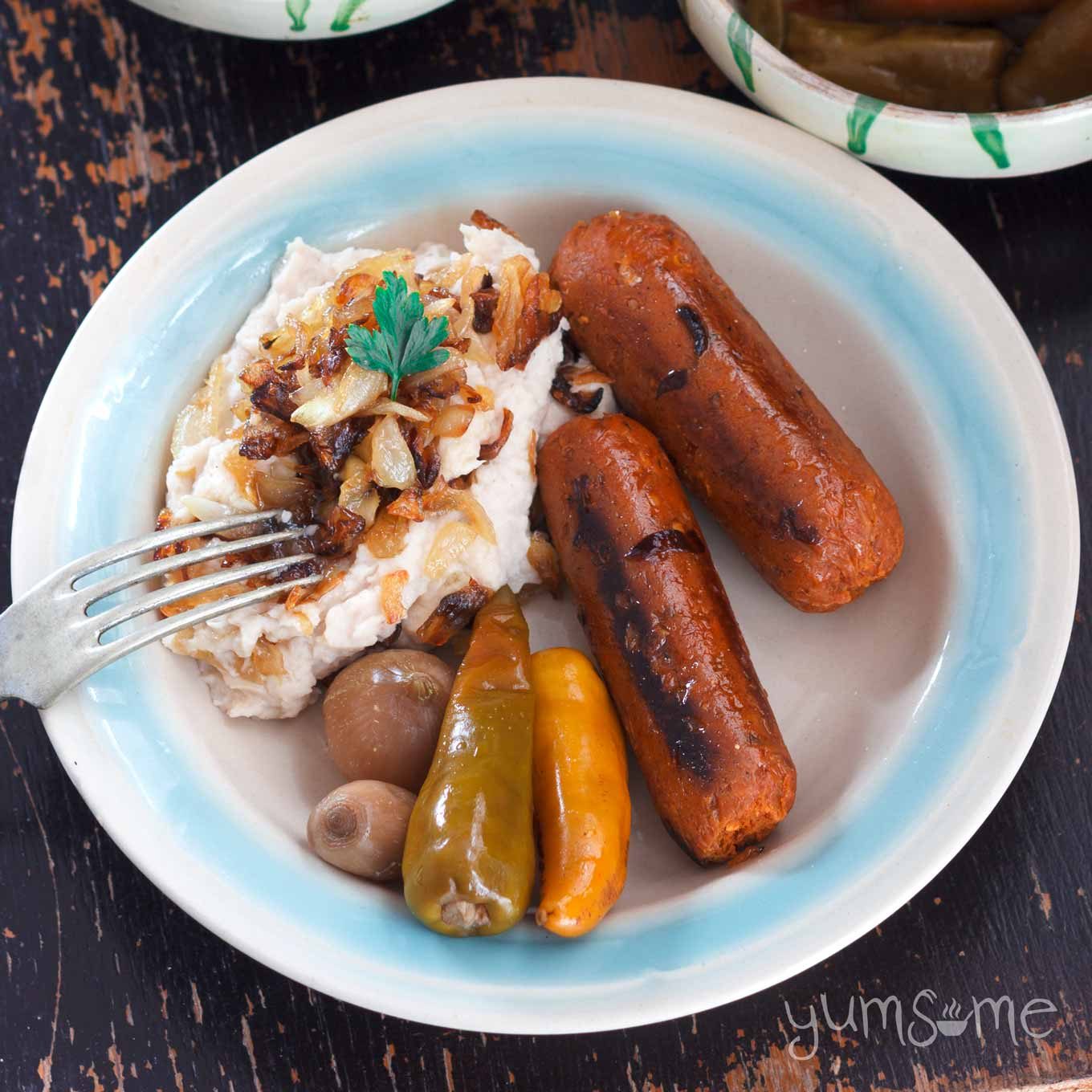 Where can I get sausage seasoning from?
Either make your own seasonings (good places to start looking are blogs dedicated to traditional sausage-making), or buy ones which are already made up.

What can I use instead of coconut aminos?
If you’re fine with soy, then do feel free to use a tablespoon of light (aka all-purpose) soy sauce instead. Or you could use Asian seasoning sauce, such as Golden Mountain, Healthy Boy, or Maggi.

What can I use instead of buckwheat flour?
Many people add chickpea flour (besan) to their seitan mix but I have found that buckwheat gives a more robust texture, which is especially useful if using seitan in casseroles, curries, and tagines, for example.

I can't buy vital wheat gluten locally, can I use a different flour?
I'm afraid not - not for this method. The high-gluten content is essential, and you just don't get that from other types of flour.

That said, it is possible to make seitan from normal flour. It's how I used to make it about 15 years ago. However, this is not ideal for making sausages because any flavouring you mix in will be washed away, so you'd have to wrap them in muslin, and simmer in a strongly-flavoured broth. Or knead the seasoning in once the dough has been rinsed. To be honest, I'm not sure how well they'd turn out.

If you want to have a go at making it though, check out this video.

I don't like the idea of foil touching my food, what can I do?
You could wrap these vegan sausages in silicone baking parchment or muslin first, then foil. Don't use non-silicone parchment though, or your sausages will stick.

Which kind of beans should I use?
Any white beans are fine. Or you could use chickpeas. My preference is for cannellini or butter beans (Phaseolus lunatus - lima beans).

Can I use different flavours and seasonings?
You certainly can - check out the recipe notes for a few ideas. 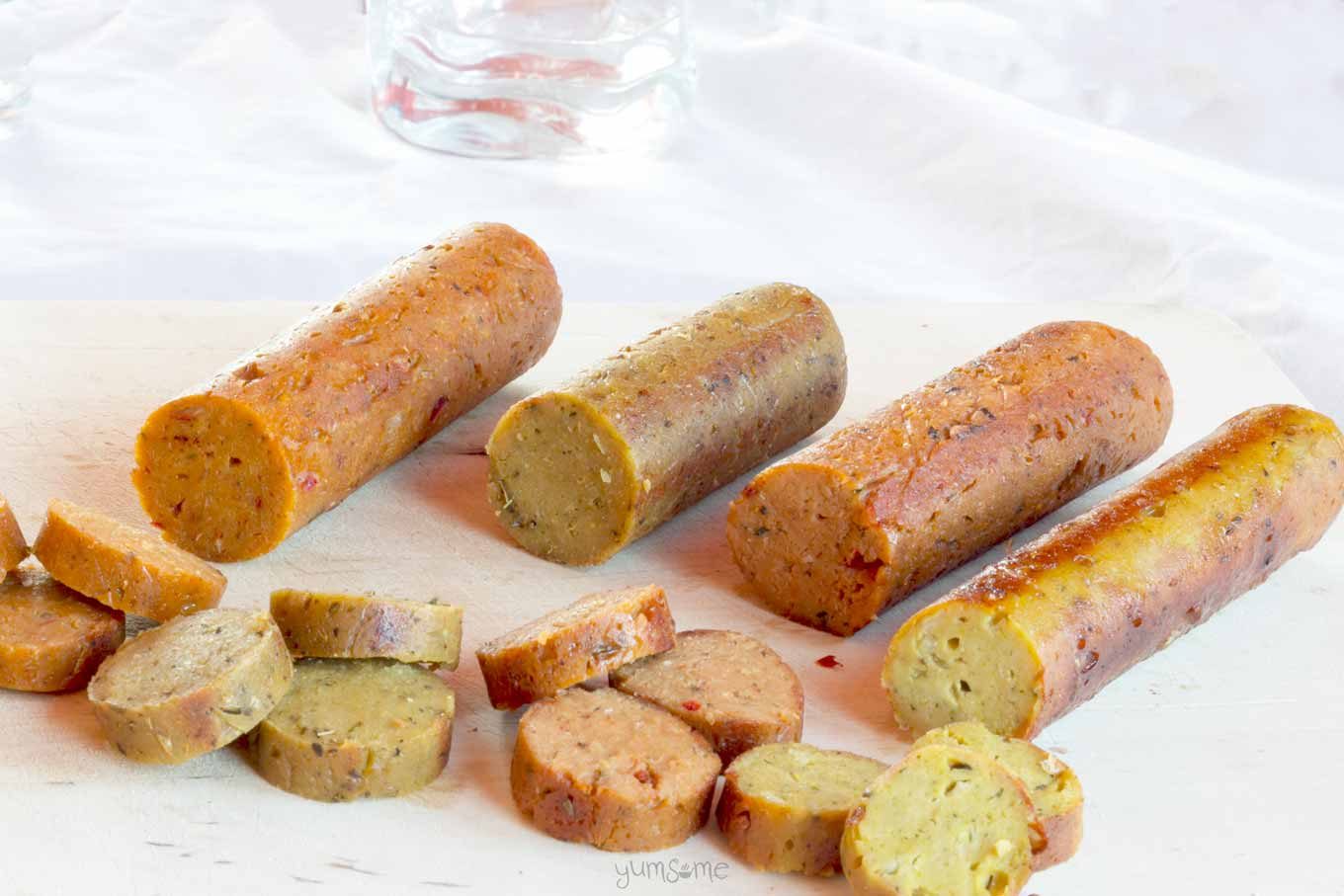 How to make easy and delicious soy-free vegan sausages using vital wheat gluten and a handful of basic pantry ingredients. Moist, firm & full of flavour, they're better than anything you can buy in the shops! I make them the day before I’m planning to use them but if you’re pushed for time, you could get away with refrigerating them for just five hours.
Print Pin Rate
Course: Mains
Cuisine: British
Diet: Vegan, Vegetarian
Nut-Free: Yes
Soy-Free: Yes
Gluten-Free: No
Prep Time: 15 minutes
Cook Time: 40 minutes
Resting time: 5 hours
Total Time: 55 minutes
Makes (slide to adjust): 8 sausages
Calories: 118kcal
Author: Nico

Variations: Italian style - Omit the oil and sausage seasoning, and add... Smoked garlic - Omit the sausage seasoning, and add... Spicy garlic - Keep the sausage seasoning, and also add... (Warning - these last ones do tend to mature and become more fiery the longer you store them.)
Nutrition Facts
Easy and Delicious Vegan Sausages
Amount Per Serving (1 sausage)
Calories 118 Calories from Fat 18
% Daily Value*
Fat 2g3%
Saturated Fat 1g5%
Sodium 132mg6%
Carbohydrates 8g3%
Fiber 1g4%
Sugar 1g1%
Protein 16g32%
Vitamin A 400IU8%
Vitamin C 1.7mg2%
Calcium 50mg5%
Iron 2.7mg15%
* Percent Daily Values are based on a 2000 calorie diet.
Did you make this recipe?Do mention @yums0me and/or tag #yums0me - I'd love to see how yours turned out!
DisclaimerMeasurements in parenthesis are approximate; it is beyond the scope of yumsome to be able to provide pinpoint-accurate ingredient quantities for every type of measuring utensil. As a guideline however, I make the assumption that: Further information may be found here 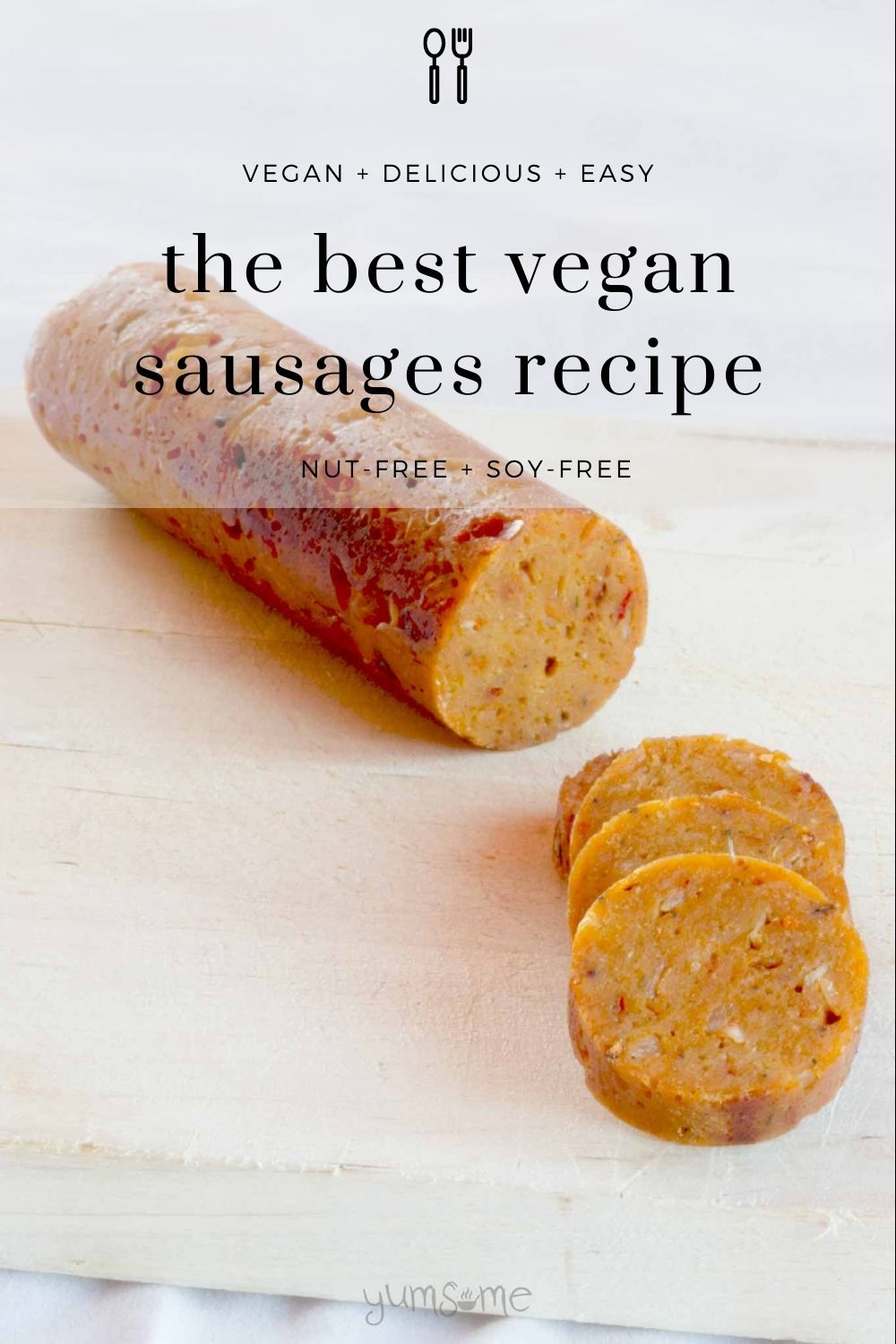