This vegan butter chicken (murgh makhani) is a delicious lightly-spiced combination of tangy yoghurt and sweet tomatoes, with butter and cashew cream to add a decadent richness. It's definitely not an everyday recipe... but it's perfect for celebrations and special occasions!

I recently made this show-stopping, protein-packed curry for my oldest friend, Sue, when she recently came over to stay with me. A confirmed omnivore and self-confessed foodie, she absolutely loved this!

Do you remember a little while ago I mentioned in my bagels post that when I was 18, I did some photoshoots with a photographer called Anita Corbin? Anita is currently following-up her 1981 Visible Girls exhibition, with Visible Girls Revisited (the new exhibition is touring Europe for the next three years), and wanted to come over to Slovenia to re-shoot me. Since the VG shoot we did 36 years ago also involved Sue, she came over to Slovenia as well.

Because I've been moving around a lot, although we'd kept in touch, Sue and I hadn't actually seen each other for around 24 years!

As soon as the doors opened in the arrivals lounge, the past 40 years melted away, and we were our teenage selves again. It was brilliant! We had four days of shooting and hanging out, and I have to tell you that it was the best.

What is Butter Chicken?

This Punjabi dish is essentially tandoori chicken to which a rich and creamy, buttery tomato-based gravy has been added.

Although tandoors (bell-shaped clay ovens, sunk into the ground) have been used to cook food since the time of the Mughal dynasty (1526-1707), it took one enterprising restaurateur, Kundan Lal Gujral, to put the now world-famous tandoori chicken on the global gastronomy map.

Gujral is also credited with inventing butter chicken at his Moti Mahal restaurant, in Delhi, shortly after the partition of India in 1947.

There are plenty of amazing vegan substitutes around for chicken and dairy, so if you don't want to make your own butter or chikkin (as I shall henceforth be calling it!), there are plenty of options available in supermarkets and online.

I actually wrote this recipe almost 20 years ago – or rather, the tandoori marinade part -  when I was volunteering at a primary school in Britain.

The upper school (years 5 & 6) did a world food project one summer, and each of the three classes studied a different part of the world; African countries, India, and The Caribbean. At the end of the summer term, each class dressed in a manner representing the country they’d studied, and performed games, music, dances, and plays relating to each one.

We invited parents, helpers, and school governors on each of the last three Fridays of term to come and sample some typical food. This is one of the recipes I devised... although at the time, it didn’t involve seitan, it was for chicken. It proved to be a great hit with pupils and adults alike, and the kids loved cooking it too.

Obviously, this is a scaled-down version – the original was for 120 people! I’ve also updated it to reflect my somewhat more authentic knowledge and experience of cooking Indian food.

It may look like a lot of ingredients and steps but like all Indian food, this vegan butter chicken is actually incredibly simple to make, although it does take a little bit of time to prep.

If you’ve made any of my other Indian recipes, however, you’ll know that the basics don’t really change much. The main difference with this dish is that the chikkin is marinated and grilled before being added to the gravy, which is really what takes the time. But it’s mostly inactive time, not time you need to spend slaving over a hot stove!

If you like this vegan butter chicken recipe, why not check out these other Indian yums while you're here?

Everyone I've ever cooked this for loves it - I bet you will too! Why not serve it with some of my vegan naan? 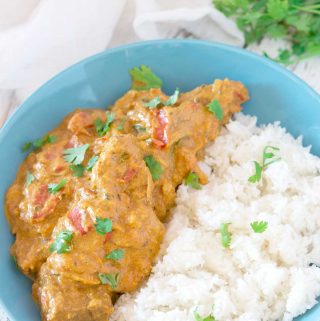 Substitutes for home-made seitan chikkin:
Nutrition Facts
Vegan Butter Chicken (Murgh Makhani)
Amount Per Serving (1 portion)
Calories 506 Calories from Fat 225
% Daily Value*
Fat 25g38%
Saturated Fat 8g40%
Sodium 1127mg47%
Carbohydrates 33g11%
Fiber 6g24%
Sugar 10g11%
Protein 44g88%
* Percent Daily Values are based on a 2000 calorie diet.
Did you make this recipe?Do mention @yums0me and/or tag #yums0me - I'd love to see how yours turned out!
DisclaimerMeasurements in parenthesis are approximate; it is beyond the scope of yumsome to be able to provide pinpoint-accurate ingredient quantities for every type of measuring utensil. As a guideline however, I make the assumption that: Further information may be found here

How to Make Seitan 'Chicken'

Nutrition Facts
How to Make Seitan 'Chicken'
Amount Per Serving (100 g)
Calories 174 Calories from Fat 45
% Daily Value*
Fat 5g8%
Saturated Fat 1g5%
Sodium 224mg9%
Carbohydrates 8g3%
Fiber 2g8%
Sugar 7g8%
Protein 25g50%
* Percent Daily Values are based on a 2000 calorie diet.
Did you make this recipe?Do mention @yums0me and/or tag #yums0me - I'd love to see how yours turned out!
DisclaimerMeasurements in parenthesis are approximate; it is beyond the scope of yumsome to be able to provide pinpoint-accurate ingredient quantities for every type of measuring utensil. As a guideline however, I make the assumption that: Further information may be found here
Pin3K
Share258
Tweet25
Share
WhatsApp
Email
3K Shares
« How To Make Classic Italian Tomato Sauce
Vegan Fruity Hemp and Buckwheat Porridge »
Protected with PIXSY