Creamy and indulgent, this vegan butterscotch pudding is really simple, and made with just six basic ingredients. And because it only takes 15 mins or so to cook (plus a bit of time in the fridge to chill), it's perfect as a weekday dessert, Sunday teatime treat, or even as a kids' party pudding!

When I was a kid, I loved butterscotch Angel Delight; my gran would whip some up for Sunday tea time, and serve it with a glacé cherry on top.

Side note: I have always loathed glacé cherries! Even as a child, I would pick them out of every dish I found them in. Which was actually everything because there was a little-known law in 1960s Britain that meant you could go to prison if every sweet dish, and at least 53% of savoury dishes, didn't contain glacé cherries. 😉

Butterscotch Angel Delight, as much as I loved it, nevertheless had a bit of a soapy aftertaste to it, and I'm guessing it was due to whichever thickener was used. Probably wallpaper paste.

Actually, Angel Delight and wallpaper paste are both made with methylcellulose - aka modified starch. It's also found in sweet pie fillings.

My vegan butterscotch pudding has no soapy aftertaste, and is completely, 100%, irrefutably, delicious. And is therefore, 1,762 times better than butterscotch Angel Delight.

Fortunately, my butterscotch pudding is not made with wallpaper paste (yay!), and it has no flimmin' glacé cherries on the top (double yay!). What it does contain, however, is just a half a dozen simple ingredients which most, if not all of us have to hand;

And no Scotch! (That's whiskey to all of you across the pond reading this!)

Why is it called butterscotch?

No one's a hundred percent certain but it's likely to be because the original butterscotch - which was apparently invented in Doncaster in the middle of the 19th century - was in the form of boiled sweets (candies), which were then 'scotched' (scored) as they hardened, in order to make them easier to break into pieces.

Another possible explanation is that scotch is a corruption of the word, 'scorch'... but that would imply the ingredients were scorched, and I'm not convinced at all. If that were so, the resultant confectionery would have a somewhat bitter taste instead of being all lovely and creamy.

Whatever the explanation, I'm sure we can all agree that butterscotch pudding is the stuff dreams are made of. Dreams where you have a big bowl of pudding that's as big as your head, and no one is making you share.

What, you've never had those dreams?

How to make my vegan butterscotch pudding recipe

Click on the pic links for more vegan desserts!

Can I use white sugar instead of dark brown sugar?
Only if you want to end up with salted caramel sauce. 😉

Do I have to use coconut palm sugar?
Narp! I use a mix of both because it gives a lighter-tasting pudding but if you want to make a richer butterscotch, then do go ahead and use only soft dark brown sugar.

Can I use a sugar substitute, such as erythritol or stevia?
No. Absolutely not. Quite apart from polylols not behaving in the same way as sucrose (they don't caramelise, for a start), they are known to have a laxative effect. In addition, erythritol can also be used as an insecticide – not convinced I'd want to ingest that! As for stevia - it has a bitter aftertaste, and that's not what you want in this butterscotch pudding!

What's the best plant milk to use for this vegan butterscotch pudding?Oatly is my #1 all-rounder but honestly, if you're fine with nuts, and you have a good high-speed blender, such as the VAC2 or Evolve, then home-made cashew milk works just as well as Oatly. Plus, you can add as many or few extras to it as you like. Soy milk is also good in this recipe, due to its creaminess.

Could I use coconut oil instead of vegan butter or margarine?
TBH, I haven't tried but if you do, you'll need to reduce the amount by about 20% (because vegan spreads tend to be around 80% fat). And if you do use coconut oil, do let me know how you got on with it, so that I can pass it on to other readers!

Do I have to use organic vanilla extract?
Not if you're not bothered about it being vegan. However, do be aware that many extracts that list 'natural flavouring' actually contain castoreum, which is taken from the scent glands of beavers. Read more in my article here (it's about halfway down the page). As always, check the label!

Help, my pudding has gone lumpy!
No problem, use a blender (normal or immersion) to get it smooth again.

Do you really hate glacé cherries that much?
Oh, yes, yes, I do. Y'know that thing your stomach does when you see a bad injury? That thing that feels as though your stomach has just flipped over? That's what biting into a glacé cherry does to mine. Plus, they are grossly over-sweet, horribly sticky, and don't even taste of cherries.

They have no redeeming features, other than to serve as a warning to always refuse dinner invitations from anyone who uses them. 🙂


Pop a cherry on top if you must … in fact, no, please don't. Ha ha! Why not decorate it with some grated chocolate and a goodly dollop of whipped vegan cream instead? Or some chopped nuts. Anything but glacé cherries!

Whatever you decide, enjoy! 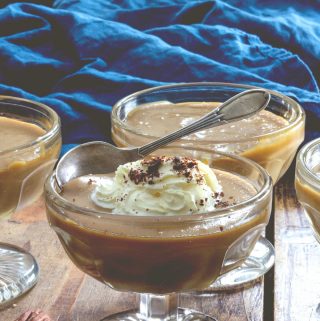 Creamy and indulgent, this vegan butterscotch pudding is really simple, and made with just a handful of basic ingredients. And because it only takes 15 mins or so to cook (plus a bit of time in the fridge to chill), it's perfect as a weekday dessert, Sunday teatime treat, or even as a kids' party pudding!
Print Pin Rate
Course: Dessert, Sweet
Cuisine: British
Prep Time: 5 minutes
Cook Time: 15 minutes
Chilling time: 1 hour
Total Time: 1 hour 20 minutes
Makes (slide to adjust): 6
Calories: 180kcal
Author: Nico

Instead of using 50/50 brown and palm sugars, you can use just brown sugar (100g or 3½-4 oz).
Nutrition Facts
Vegan Butterscotch Pudding
Amount Per Serving
Calories 180 Calories from Fat 54
% Daily Value*
Fat 6g9%
Saturated Fat 1g5%
Polyunsaturated Fat 1g
Monounsaturated Fat 1g
Sodium 178mg7%
Potassium 48.13mg1%
Carbohydrates 29g10%
Fiber 1g4%
Sugar 21g23%
Protein 1g2%
Vitamin A 20IU0%
Vitamin C 2.5mg3%
Calcium 140.5mg14%
* Percent Daily Values are based on a 2000 calorie diet.
Did you make this recipe?Do mention @yums0me and/or tag #yums0me - I'd love to see how yours turned out!
DisclaimerMeasurements in parenthesis are approximate; it is beyond the scope of yumsome to be able to provide pinpoint-accurate ingredient quantities for every type of measuring utensil. As a guideline however, I make the assumption that: Further information may be found here
Pin1K
Share433
Tweet
Share
WhatsApp
Email
1K Shares
« Luxury Vegan Mincemeat
The Expanse Recipes: Alex Kamal's Mariner Valley Lasagna (Vegan) »
Protected with PIXSY