Sweet, tangy, and crunchy with a hint of chai masala, this vegan spiced plum crumble is so delicious, and easy to make too. Serve it hot with custard or ice cream, and I guarantee you'll soon be feeling completely hygge.

It's officially autumn - my favourite time of the year. Huzzah! And you know what that means, don't you? It's time to make hearty, warming, comforting foods.

The plums for this spiced plum crumble did not, I have to admit, come from our orchard because right up until late spring, there was snow. Which prevented the plum blossoms setting... ergo, no plums in the autumn.

Fortunately, at my local market, there are plenty of sellers whose orchards are not up in the Carpathian foothills, so they've yielded a wondrous bounty. So much so, that plums are only 3,50 lei per kilo (that's around 70p, or 90 US cents).

Crumbles have always been among my favourite desserts, especially when served with cinnamon ice cream or hot, creamy, custard. When I saw the plums at the market on Saturday, I just knew I had to put them in a crumble. Because it's autumn, right?

Now, if you're thinking that I've found a genius way to make veganised egg custard, you'd be wrong, and I'm sorry to potentially disappoint you. The truth of the matter is that I have actually never liked egg custard. Because I've never liked eggs. No matter what anyone says, egg custard tastes of eggs. It's gross!

I've always made my custard with cornflour (cornstarch), sugar, vanilla, milk, and cream. Just as my dear old gran did.

(Actually, most of the time, she used Bird's custard powder... but occasionally she'd make it from scratch.)

These days I use plant milks and creams to make my custard, and they work perfectly. In fact, amato mio, who is not a custard fan, actually likes my 'cheat' custard!

Is anyone else now hankering for bananas and custard? Yum!

Making this spiced plum crumble is really easy, especially if you have a food processor; simply wash your plums, and remove the stones, mix them with the spices, and arrange them in the bottom of a large pie dish. Make the crumble topping, spread it out over the top of the plums, then bake in the oven.

By the way, if you like a denser crumble topping but still want it to be a bit 'fluffy', just press it down a bit with the back of a spoon, and then rake the top with a fork. Perfect!

Check out these vegan sweet treats, too!

Have it with custard. Have it with ice cream. Have it on its own - it's certainly moist enough. However you have it, I'm certain you're going to adore this plum crumble!

How would you eat your spiced plum crumble? 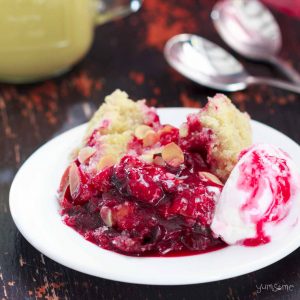 For the crumble topping:

For the plum filling:

Nutrition Facts
Vegan Spiced Plum Crumble
Amount Per Serving
Calories 450 Calories from Fat 162
% Daily Value*
Fat 18g28%
Saturated Fat 4g20%
Sodium 153mg6%
Carbohydrates 68g23%
Fiber 4g16%
Sugar 35g39%
Protein 7g14%
* Percent Daily Values are based on a 2000 calorie diet.
Did you make this recipe?Do mention @yums0me and/or tag #yums0me - I'd love to see how yours turned out!
DisclaimerMeasurements in parenthesis are approximate; it is beyond the scope of yumsome to be able to provide pinpoint-accurate ingredient quantities for every type of measuring utensil. As a guideline however, I make the assumption that: Further information may be found here
Pin467
Share71
Tweet44
Share
WhatsApp
Email
582 Shares
« How To Make Spicy Pumpkin Purée
Vegan Miso Caramel Sauce »
Protected with PIXSY