Made with a handful of basic pantry staples, and flavoured with fruit purée, my easy vegan marshmallows are based on a delicious Russian confection, called zefir.

Have you ever bought vegan marshmallows from a shop, and been utterly dismayed at the bag of overly-sweet, tough lumps of rubber masquerading as confectionary? Yeah, me too.

I mean what flavour are they even supposed to be? Sugar flavoured with sugar, with a side order of chalk?

A while back, I discovered zefir (aka zephyr, zephir, or zefi) - a delightful marshmallow treat from Russia that's flavoured with real fruit.

Zefir is gorgeous. And so very simple to make. There are no weird ingredients (unless you find agar-agar weird). While Russian zefir does contain egg white, mine doesn't (I use aquafaba).

This is the vegan marshmallows recipe you've been searching for! And yes, you can toast them too (as long as you've left them to air-dry for 24-48 hours).

Zefir has been enjoyed in Russia for centuries, and is an adaptation of a fruit confection, called pastila. If you've ever eaten fruit pastilles, you'll have a good idea of what pastila is like. (Not to be confused with meat pies!)

Because it's based on pastila, zefir is traditionally made with a fruit purée (apple, blackberry, and cherry being the most popular). Honey and eggs are added, as well as something to make the whole thing gel. Pectin is usual, as is agar agar.

Allegedly, the 17th century Tsar, Ivan the Terrible, was rather fond of zefir (because who wouldn't be!), and is said to have mentioned them in a note to St Cyril's monastery in Beloozero (belo = white, ozero = lake). He said they were a delicacy made from apple juice.

Russian purists will often tell you that zefir is completely different to marshmallow because the latter contains no egg. Well guess what? My zefir-based vegan marshmallows contain no egg either! Ha! (Nor honey.)

Do note that zefiry are initially very light, and have a melt-in-your-mouth texture. However, after you've dusted them with icing sugar, if you leave them to air-dry for 24-48 hours, they will firm up even more, and become chewy.

It seems that these marshmallows were named after the Greek god of the west wind, Zephyrus, on account of them being light and airy.

Of all the Anemoi (winds), Zephyrus was the most gentle and light. The others were Boreas - north, Notus - south, and Eurus - east.

The marsh-mallow (Althaea Officinalis) is a marshland plant native to Europe, Asia, and North Africa. All parts of the plant are edible. The flowers and leaves can be used in salads. They can also be added to fritters. However, it's the marsh-mallow root that is, as they say, the business end of the plant!

People, notably the ancient Egyptians, have been boiling up marshmallow root to make a mucilage, and mixing it with honey for thousands of years.

This concoction has long been believed to soothe sore throats and coughs, and even, in some cases, to help heal wounds. In fact, the Latin name of the marshmallow is derived from the Greek word, althein, which means, 'to heal'.

During the mid-18th century, the French started to make pâte de guimauve from a decoction of marsh-mallow root, honey, and whisked egg white (and sometimes gum arabic). This produced the light and fluffy marshmallow we're familiar with today. Albeit a softer version.

Like its earlier counterparts, guimauve was made for medicinal treatments, particularly those relating to the lungs and chest, and was often flavoured with orange blossom or rosewater.

By the end of 19th century, with the traditional way of making guimauve being increasingly expensive, very time-consuming, and rather labour-intensive, manufacturers needed a more cost-effective and efficient way to meet growing demand. Consumers had cottoned onto the fact that marshmallows are actually delicious confections, so marsh-mallow root was dropped in favour of the cheaper gelatine, and the starch mogul system was developed as an alternative to endless hours of cutting and shaping marshmallows by hand.

Since the mid-20th century, marshmallows have been produced using the extrusion method, which results in the cylindrical candies we're used to today.

These ones certainly are! However, a lot of commercial marshmallows are not gluten-free because the glucose syrup they're made with is derived from wheat. Sometimes they may contain wheat starch, too.

In addition, there may be cross-contamination from suppliers that use foods or other products containing gluten. Also, some 'natural flavourings' may also contain gluten.

Traditionally, no. They are usually made with gelatine, which is a gelling agent made from boiling up skin, cartilage, and hooves/feet. Agar-agar is a great vegan substitute!

Although honey has been the de rigueur sweetener (its medicinal properties are well-known, and in fact, its Slavic name is 'med'), these days, it's more likely to be corn syrup or glucose syrup and sugar. Cornstarch is also used.

Do try to use fresh blackberries if you can. The flavour is superb. If however, they are out of season, you can use frozen ones instead but do be aware that they may not be as sweet as fresh ones. Apples of course, are generally available all year-round!

I just use bog-standard granulated white sugar for this recipe. Reason being that it's not going to impart any colour or extra flavour to the zefir.

I have not made these marshmallows with agave nectar, maple syrup, corn syrup, or anything other than sugar. It might work - after all, honey does - but it may result in a softer marshmallow.

Similarly, I have never used any sugar substitutes (e.g. stevia, erythritol, etc). I can't see them working for this recipe, to be honest. However, if you do attempt to make this with sugar substitutes, please let me know how you get on!

Agar-agar is made from boiling up algae or seaweed, so is completely vegan. Because it's odourless and has no flavour, it can be used in many dishes which need to be set. It's an essential pantry staple across the world, particularly in Asia. It's also known as China grass, kanten, and jaffna moss.

As well as its numerous culinary uses, agar is used to grow cultures in petri dishes. It's the perfect medium for cell culture, and as such, has many medicinal applications. It's also used in diet products to help supress the appetite, in laxatives, and as a clarifier for beer (instead of isinglass, a gelatine-like substance made from the swim bladders of sturgeon - hence, some beers not being vegan). In non-food applications, agar-agar is used to add a protective waterproof layer to paper and some textiles.

Aquafaba is the protein-packed liquid by-product of cooking legumes such as chickpeas, butter beans, kidney beans, etc. In addition to being a great way of getting additional protein into meals such as soups and casseroles (use aquafaba as part of the liquid needed), it behaves just like egg white. This means it can be used to make meringues, add leavening to cakes and bakes, and even as a glaze for pie crusts. Next time you make hummus, don't throw away the aquafaba! PS it makes wonderful mayo, too!

How to make marshmallows

Nutrition Facts
Zefir - Delicious Russian Marshmallows (vegan)
Amount Per Serving (1 marshmallow)
Calories 105 Calories from Fat 9
% Daily Value*
Fat 1g2%
Saturated Fat 1g5%
Sodium 1mg0%
Potassium 23mg1%
Carbohydrates 27g9%
Fiber 1g4%
Sugar 26g29%
Protein 1g2%
Vitamin A 24IU0%
Vitamin C 3mg4%
Calcium 3mg0%
Iron 1mg6%
* Percent Daily Values are based on a 2000 calorie diet.
Did you make this recipe?Do mention @yums0me and/or tag #yums0me - I'd love to see how yours turned out!
DisclaimerMeasurements in parenthesis are approximate; it is beyond the scope of yumsome to be able to provide pinpoint-accurate ingredient quantities for every type of measuring utensil. As a guideline however, I make the assumption that: Further information may be found here 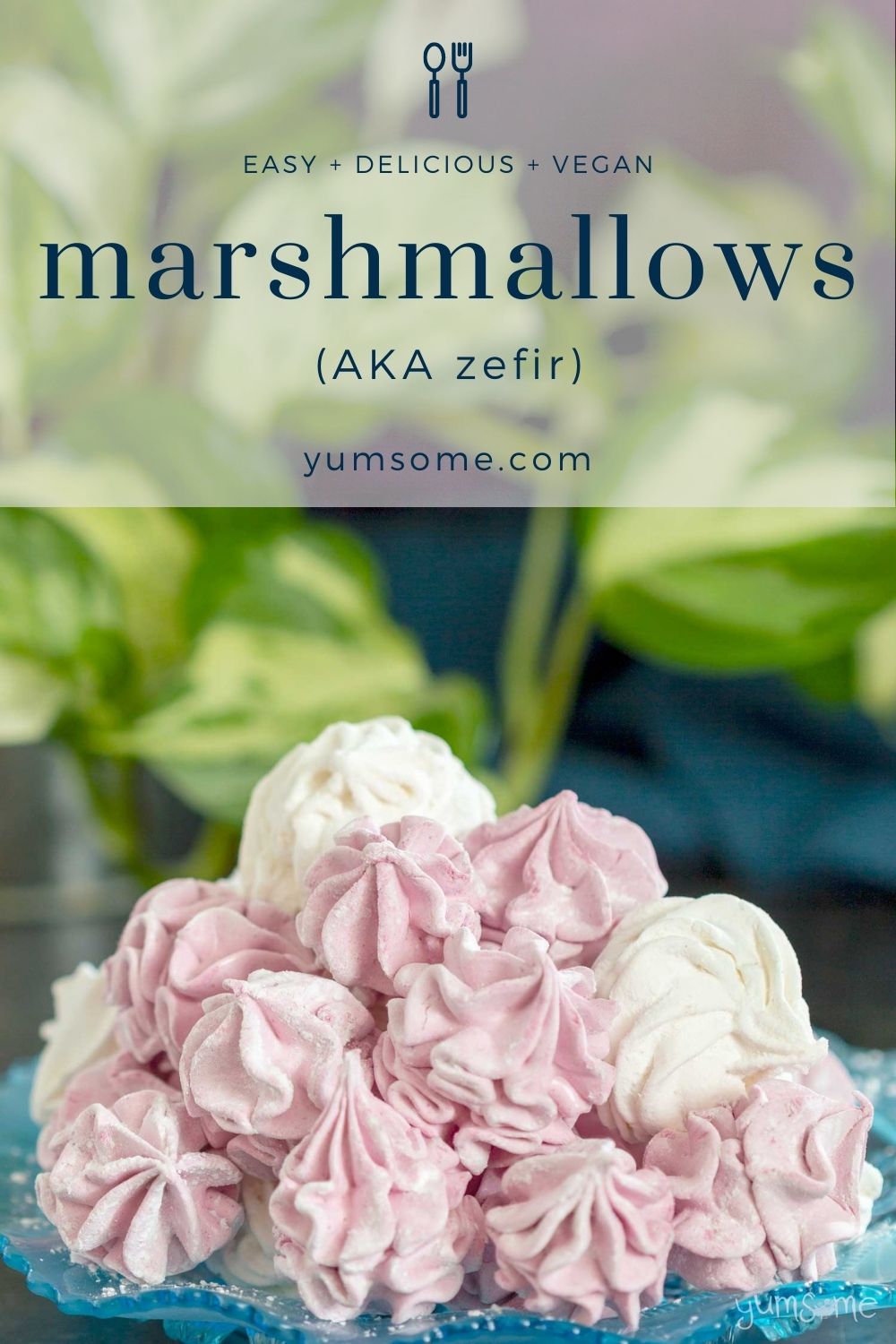