Aromatic, sweet + soft, rose Turkish Delight (lokum) is really simple to make, and is a luxurious treat any day of the year, not just at Christmas time!

What is Turkish Delight?

Turkish Delight, or lokum, is a gel-like candy, made from cornflour (cornstarch) and sugar. It can be flavoured with aromatics, such as rose or lemon. Or with nuts. For example, walnuts, or pistachios. Date, bergamot, and mastic are all popular flavours, too.

As a child living with my grandparents, Christmas meant one thing… Actually, it meant a lot of things but what I remember most vividly is being allowed to have a snowball (advocaat and lemonade), and the welcome appearance of the large round wooden boxes of rose and lemon Turkish Delight that made their way into our home every December.

For some reason, we only ever had Turkish Delight at Christmas but for me, those soft, delicately-flavoured cubes of confection heaven were the best thing ever. Better than the family visits. Better than all the Elvis films on TV. Better than the huge pillowcase full of presents at the end of my bed. I’m not joking.

Plus, I was a huge fan of the Narnia stories, and in particular, Jadis, so I guess it was only right that I should love Turkish Delight so much.

In fact, come to think of it, perhaps that’s why it was traditional to only have Turkish Delight at Christmas in Britain because Jadis cast a spell of eternal winter over Narnia, and Christmas falls in winter. At least in the Northern Hemisphere!

When I was a bit older, and was allowed to have chocolate bars*, Fry’s Turkish Delight was always high on my list of treats. It was nothing like the stuff we had at Christmas but I loved the chocolate coating and the intense rose flavour of the translucent pink centre.

*(A sure sign I was growing up because in my family, kids were only allowed penny sweets. Bars were reserved for grown-ups and teenagers, and once a year in Christmas stockings).

In 2000, I spent some time in Turkey, and resolved to positively stuff my face with Turkish Delight for as long as possible. (Never let a good nomming opportunity go to waste, I say.)

What a surprise! It was nothing like I was used to. Far from just the usual rose and lemon, the lokum came in myriad flavours, and was not as sweet as the Christmas stuff. Some of it was even covered in coconut instead of icing sugar.

(Actually, it's a combo of icing sugar and cornflour... but let's not split hairs here.)

The first time I went to the home of one of my Turkish friends, I was shown to the best room in the house. In Turkish homes, a room is reserved for receiving visitors, much like parlours and reception rooms in British households. I was plied with delicious apple tea and lokum.

My friend told me that the reason for the tea and lokum is because it’s believed that if you put something sweet in the mouth, then something sweet comes out. That is to say, good conversation.

After drinking apple tea, and eating a few pieces of lokum, I cannot imagine having a bad word to say about anything.

Speaking of tea, many people seem to be under the impression that Turks only drink coffee and apple tea. Nothing could be farther from the truth. Go to any market, and you'll see scores of different types of herbs and flowers for making tea!

Another Turkish friend described lokum as being ‘Turkish Viagra, as he winked at me, and ate yet another piece! >ahem<

Of all the different Turkish Delight I ate while in Turkey, my favourite was always the rose, though. Chalk that up to my childhood. And CS Lewis.

Turkish Delight in The Balkans

When amato mio and I lived in Belgrade (Serbia), I was delighted (no pun intended) to discover that because of the Ottoman influence still prevalent in the country, Turkish Delight is a big thing there too. Yay!

In Serbia, Turkish Delight is called ratluk, which is a corruption of the Turkish, rahat lokum. This is itself a corruption of the Arabic, rāḥat al-hulqūm, which translates as ‘comfort of the throat’. It alludes to lokum's early medicinal use, around the 9th century.

When we lived in Transylvania (Romania), we discovered that there too, Turkish Delight is a thing. And it's called rahat, which Google Translate tells me means 'shit'. Pretty sure Google is lying to me.

Check out these sweet treats, while you're here!

The name, Turkish Delight, was allegedly coined in either the late 18th or early 19th century by an un-named British traveller who brought a sizeable stash of lokum home with him. Not, as some claim, by the eminent Victorian explorer, Sir Richard Burton.

During the mid-19th century, when lokum began to be imported into Britain on a regular basis, it became known by the rather less glamorous name of Lumps of Delight. Which just makes me think of this painting by the wonderful Beryl Cook!

These gentlemen seem to be rather fond of the lady's lumps of delight! | Strippergram ©Beryl Cook

I am aware that some people make lokum with gelatine but that’s not the authentic way to make Turkish Delight. Real lokum is made with cornflour (cornstarch for you non-European readers). There really is no need to add gelatine, especially as doing so would render the lokum non-vegetarian.

Making Turkish delight is simply a case of adding sugar syrup to a cornflour and cream of tartar paste, cooking for an hour, flavouring and colouring the mix, turning out into a suitable container, waiting for it to cool, then cutting into cubes, and dusting with icing sugar and cornflour to prevent sticking. It really is as easy at that.

You can buy rosewater from online retailers, such as Amazon, or at Middle Eastern and Indian supermarkets.

How to make Turkish Delight 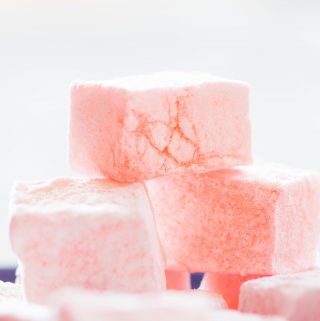 For the Turkish Delight

Not strictly necessary but it will save your arms:

Nutrition Facts
Simple Rose-Flavoured Turkish Delight
Amount Per Serving (1 piece)
Calories 59
% Daily Value*
Sodium 3mg0%
Carbohydrates 15g5%
Sugar 13g14%
* Percent Daily Values are based on a 2000 calorie diet.
Did you make this recipe?Do mention @yums0me and/or tag #yums0me - I'd love to see how yours turned out!
DisclaimerMeasurements in parenthesis are approximate; it is beyond the scope of yumsome to be able to provide pinpoint-accurate ingredient quantities for every type of measuring utensil. As a guideline however, I make the assumption that: Further information may be found here 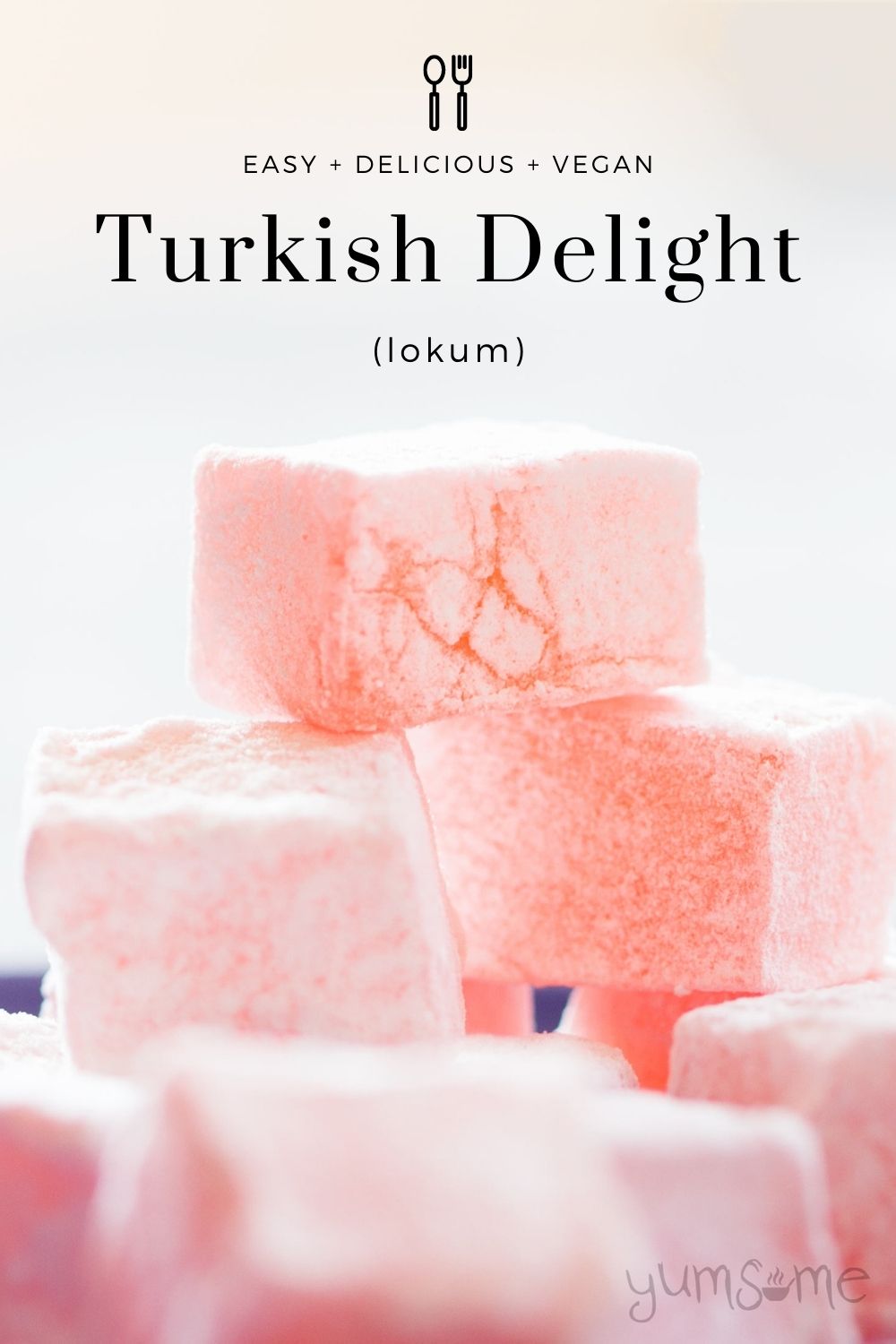