This loaded vegan lasagne is chock-full of seasonal veggies, and brimming with my wonderfully creamy besciamella (béchamel). Its deliciousness completely belies the ease with which it is made, and is pretty much guaranteed to put a smile on the faces of all who eat it!

A few weeks ago, one of my friends said to me,

Nico, you're half Italian, why are there no pasta recipes on yumsome?

My response was that it's such an everyday food, why would I? Would she publish a recipe for beans on toast or a sandwich? To the latter, she looked at me, and in her best Loki voice, said...

So here it is - after three years of writing this blog, I present you with my very first yumsome pasta recipe. It's a good 'un. Go and make it. Like, now. 😉

Make this vegan lasagne with all the things!

I actually tend to call this my back of the fridge lasagne because it's basically full of those lurkers we all find hiding behind tubs of last week's leftovers.

Anyway, it basically means that this loaded vegan lasagne is inherently adaptable, not to mention frugal. Plus, if where you live is anything like where I am at the moment, this is the perfect excuse to not have to go out to buy ingredients for tonight's dinner.

Hmmm… instead of loaded vegan lasagne, maybe I should call it 'I-really-don't-want-to-go-out-because-the-weather-is-nasty' vegan lasagne. Doesn't really roll off the tongue though, does it? (Even though it's completely accurate!)

What goes into this loaded vegan lasagne?

In this recipe, I've used tenderstem broccoli, asparagus (OK, they weren't lurking, they were left over from a quiche I made for someone), half a butternut squash (leftover from making soup), leeks, red and yellow peppers, aubergine (left over from a curry), and sun-dried tomatoes (also not lurking but I had about a quarter of a jar taking up much-needed space in my ridiculously small food cupboard), as well as the ubiquitous onion and garlic combo.

Oh, and because I also needed to make some room in my also-ridiculously-small freezer for the raw cheesecake I've been working on, I chucked in half a large bag of kale too.

But really, you can use whichever veggies you have - this is a very forgiving recipe. Mushrooms and spinach work exceptionally well, for example… although I do fry the 'shrooms off first, otherwise they add too much liquid.

I know that some folk like to use a cheese sauce in their lasagne but I am generally not one of them; I prefer to keep with tradition, and use besciamella because it complements the flavours of the veggies, rather than overpower them. I save the cheese for the top!

I make my besciamella with Oatly Foamable, which makes it lovely and creamy… and of course, it has to have a goodly grating of nutmeg too.

If you prefer a cheesy sauce, there's no real reason not to throw a few handfuls of store-bought grated vegan cheese, such as Violife, into the besciamella, and bolster it with some nooch. Or even better, melt some of my extra mature vegan cheddar into it.

You could even make a milder version of my nacho cheese. I've been known to thin out some I've had in the fridge with plant milk - it works brilliantly.

Or just use the sauce from my cauliflower cheese recipe!

While using a cheese sauce isn't completely authentic, the most important thing is to make this to your taste. And let's face it, the lack of a meaty ragù kind of renders this pretty far from being an authentic lasagne anyway!

I could claim that I always make my own pasta but the fact of the matter is that after a day of being on my feet, cooking for clients, I really don't want to be slaving away in my own kitchen, so I very often use store-bought dried lasagne sheets.

(BTW, pasta for lasagne should never be made with egg - the lasagne is rich enough already.)

Do I need to pre-cook the lasagne sheets?

One thing I will say, is that even if you do buy the ones which claim to need no pre-cooking, don't believe it - they definitely need a couple of minutes in some boiling water before being added to the lasagne dish. If you don't do this, they won't cook through properly in the oven, and you'll have crunchy bits.

And don't - for the love of Carluccio - put oil in the cooking water! This is anathema to us, and only Wrongy McWrongpants of Wrongtown would do it.

Using a Crock-Pot or slow cooker

I like to caramelise the veggies to really bring out their sweetness; and my trusty Crock-Pot has a sauté function, which is perfect for this; not only do I not have spitty oil splashes to clean up, I can just chuck stuff in, give it a stir, put the lid on, and forget about it for half an hour.

I'm aware that some folk prefer not to use oil in their cooking, and that's fine - each to their own - but I do, and no amount of trying to persuade me otherwise is going to change my mind. Besides, as Ned Stark famously said…

Winter is coming... and we need a little extra fat to help keep us warm.

Oh, shush, he totally did say that - lookie, here's the proof…

If you like this loaded vegan lasagne recipe, check out these vegan Italian yums!

This recipe will make enough for eight generous portions, and will keep in the fridge for around a week, provided it's tightly covered over or kept in an airtight container. It doesn't freeze brilliantly though, on account of the aubergines. If you don't use them, it should be fine to freeze.

I like to serve this lasagne with a simple green salad and some baby plum tomatoes but there's no reason you couldn't add a hunk of fresh bread too (yay, carbs!).

What would you serve loaded vegan lasagne with? 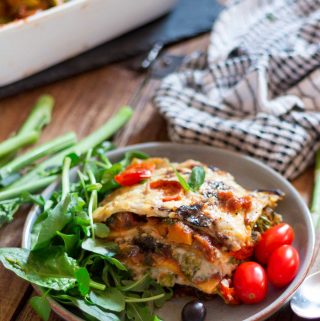 This loaded vegan lasagne is chock-full of seasonal veggies, and brimming with my wonderfully creamy besciamella. Its deliciousness completely belies the ease with which it is made, and is pretty much guaranteed to put a smile on the faces of all who eat it!
Print Pin Rate
Course: Mains
Cuisine: Italian
Prep Time: 20 minutes
Cook Time: 1 hour 40 minutes
Total Time: 2 hours 15 minutes
Makes (slide to adjust): 8 servings
Calories: 596kcal
Author: Nico

Nutrition Facts
Loaded Vegan Lasagne
Amount Per Serving (1 serving)
Calories 596 Calories from Fat 234
% Daily Value*
Fat 26g40%
Saturated Fat 5g25%
Polyunsaturated Fat 17g
Sodium 1900mg79%
Carbohydrates 70g23%
Fiber 14g56%
Sugar 24g27%
Protein 14g28%
* Percent Daily Values are based on a 2000 calorie diet.
Did you make this recipe?Do mention @yums0me and/or tag #yums0me - I'd love to see how yours turned out!
DisclaimerMeasurements in parenthesis are approximate; it is beyond the scope of yumsome to be able to provide pinpoint-accurate ingredient quantities for every type of measuring utensil. As a guideline however, I make the assumption that: Further information may be found here

I'm linking up my loaded vegan lasagne recipe with...