Although not much like traditional dairy Cheddar, this vegan cheese is nevertheless delicious, melts really well, and is great for cheese and onion toasties!

I came across this recipe, when we were living in Chiang Mai, and a friend posted the link on our local vegetarian Facebook group. He promised to provide bread and chutney if someone else would make the vegan cheeze, and then we'd all have a picnic.

I couldn't resist a challenge like that - not least because at that point, I hadn't had chutney since amato mio and I were visiting his mum in the UK at the end of 2012. There's always a variety of home-made jams and preserves from mother-out-law and her friends & neighbours for us to tuck into when we visit, so we do tend to binge a bit.

To be honest, living in Chiang Mai at the time, I fully expected to have to substitute most of the ingredients but as it was, the only things from Mary's original recipe that I was unable to find was the smoked paprika and the tapioca flour - the latter of which was actually out of stock in our local Rimping supermarket. I did sub rice vinegar for balsamic because not only is balsamic hideously expensive in Chiang Mai (we're talking second mortgage expensive!), I happened to have a bottle of rice vinegar already. Plus, rice vinegar is milder and less sweet than balsamic.

Having made this with coconut milk, I'm keen to use other non-dairy milks to see how they compare - I think unsweetened soy milk would work. This one however, results in a delicious, creamy, very slightly sweet cheeze, which slices and melts very well. Don't expect vegan cheeze to taste the same as dairy cheese though - it doesn't - but it is still a great substitute, and I really like the taste and texture. 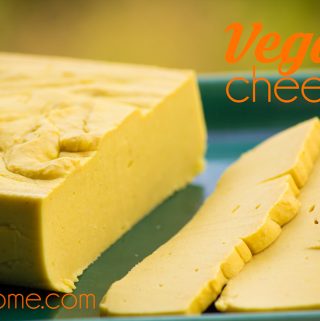 Did you make this recipe?Do mention @yums0me and/or tag #yums0me - I'd love to see how yours turned out!
DisclaimerMeasurements in parenthesis are approximate; it is beyond the scope of yumsome to be able to provide pinpoint-accurate ingredient quantities for every type of measuring utensil. As a guideline however, I make the assumption that: Further information may be found here
Pin32
Share245
Tweet
Share
WhatsApp
Email
277 Shares
« How to Make Ras el Hanout
Easy Tomato and Persimmon Chutney »
Protected with PIXSY