While it may not be the most attractive dish in the world, what this vegan tagine lacks in style, it more than makes up for in flavour. Chock-full of delicious veggies, and cooked with fiery spices and fragrant herbs, this vegan Moroccan vegetable tagine is not only a sumptuous feast of goodness, it's incredibly easy to make too.

One of the best things about living in Taroudannt, in Morocco's Souss Valley, was the availability of fresh fruit, vegetables, herbs, and spices. Not only was there an abundance, it was all very reasonably-priced too - between 30p and 75p per kilo, depending on what I bought. Fresh dates, for example, were around 20 dirham per kilo (£1.50), olives were roughly 90p per kilo (12 dirham), and I could buy huge bunches of coriander, parsley, and mint for 2 dirham each (15p).

At the greengrocers in the souk, fruit and vegetables were sold by weight of the entire basket, not individual types of foods. So, for example, I would buy a couple of kilos of veggies each day, which could be a mix of potatoes, pumpkin, aubergine, onions, garlic, carrots, beans, tomatoes, peppers, chillis, etc., and my basket would cost me roughly 60p.

Bananas were a little more expensive but oranges were really cheap. And I have to admit that Morocco is the only place I've ever been able to eat oranges because usually they are far too acidic. The ones in Taroudannt were so sweet and juicy, and didn't burn my mouth at all. I was also able to drink freshly squeezed orange juice there - again, something I've never been able to do anywhere else in the world.

Like most places we've lived outside Asia and the West, bread in Morocco is a staple, so of course, like veggies, it's pretty cheap (although expensive compared to Serbia and Romania). We used to go out in the morning, and buy enough to see us through breakfast, lunch, and dinner. A typical conversation with our bread guy would be... 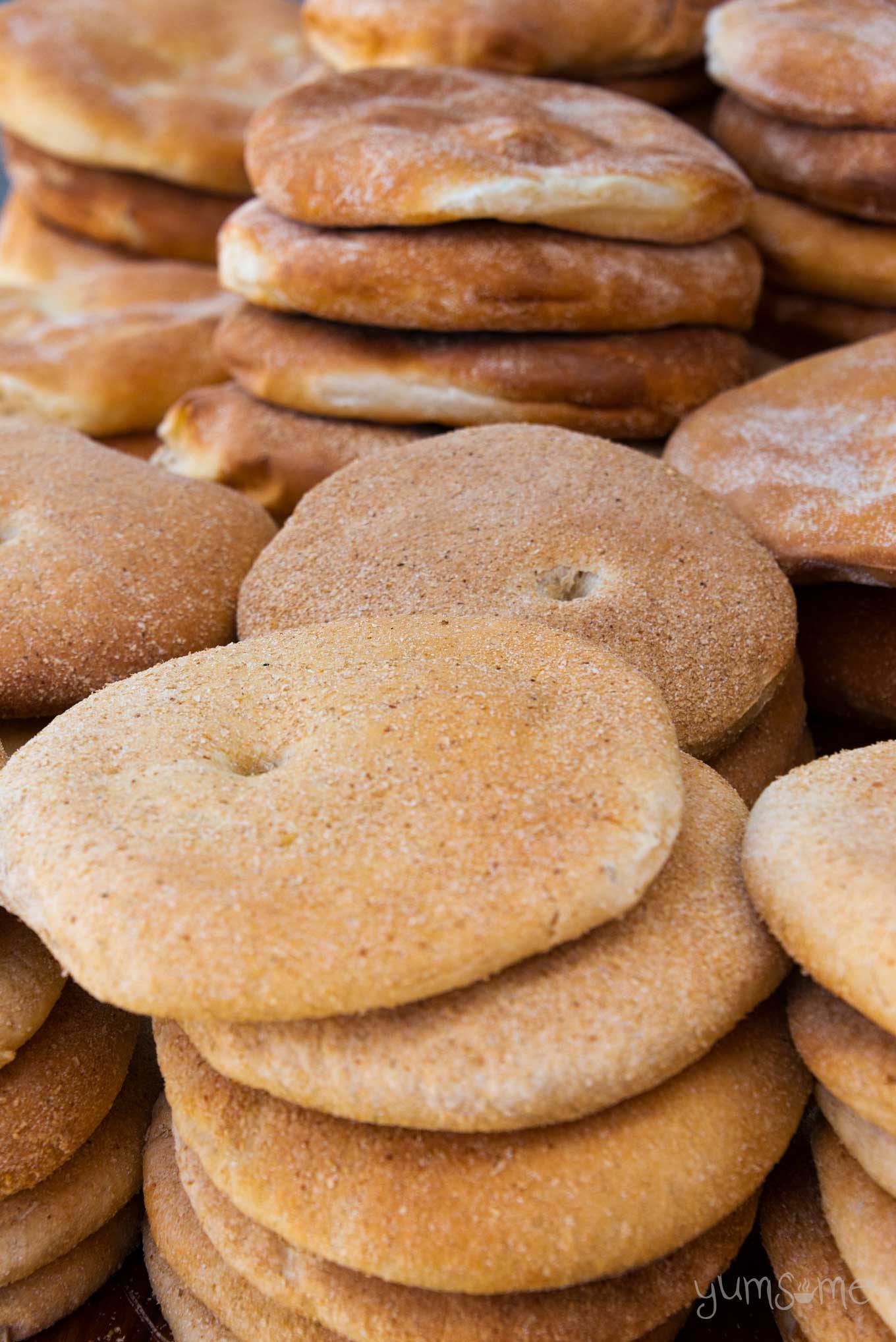 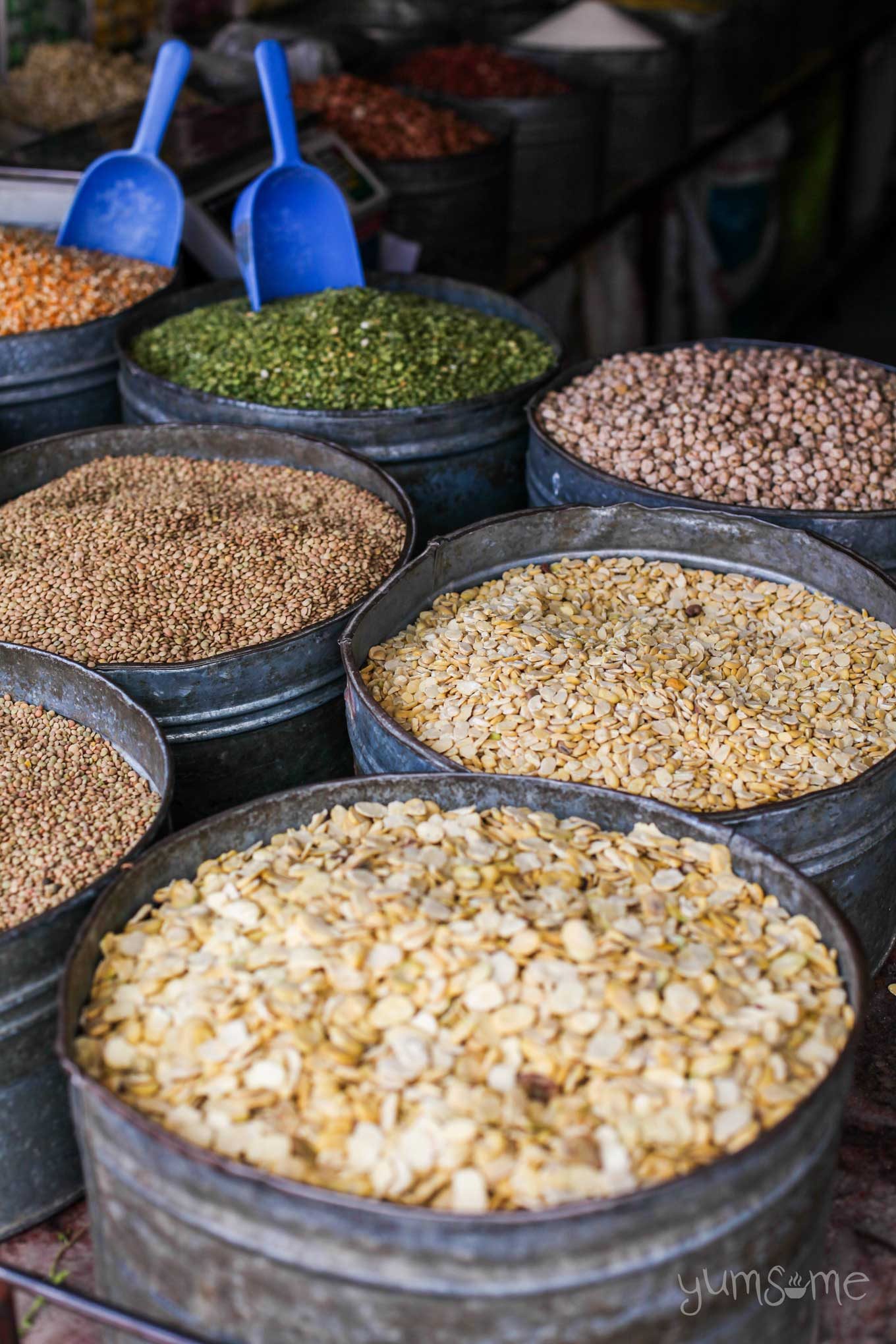 Another thing I liked about living in Morocco was that very few foods were pre-packaged, which meant it could be bought in as small or large quantities as needed... therefore no food or wrappings waste. I would take my own basket to the souk, and no one ever reached for a carrier bag to put my purchases in! Dates would be put into paper bags, pastries and cookies into small cardboard boxes. The only time plastic bags were used were for olives and spices.

I absolutely loved shopping in the souk; there were no supermarkets, just tiny family-run stores and stalls, selling a variety of everyday goods (tea, sugar, household cleaners etc.), plus loads of fruit and vegetable sellers, herb and spice merchants, and purveyors of dates, olives, and biscuits. There were also a myriad sellers offering freshly roasted coffee beans, which smelled heavenly as I walked past. 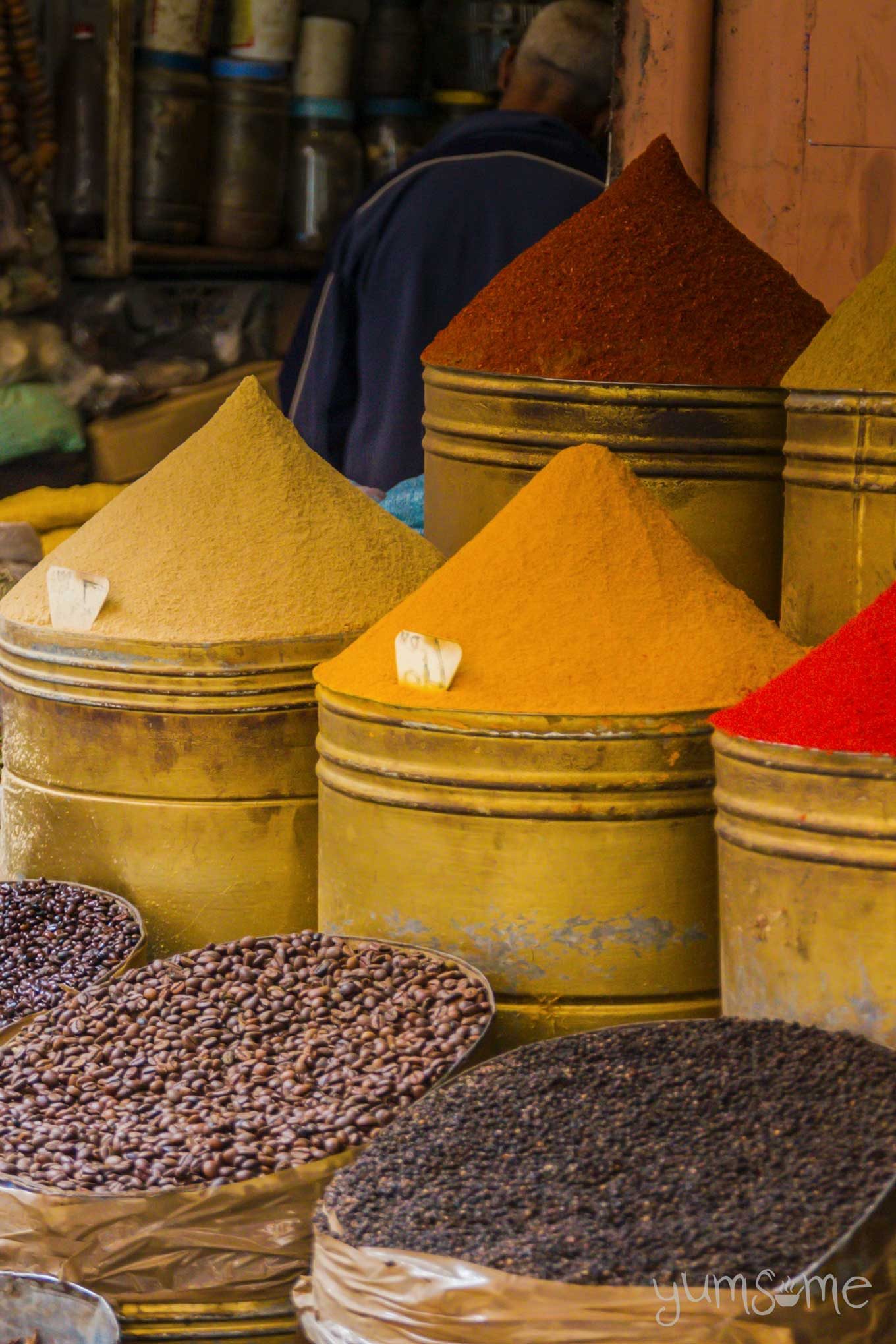 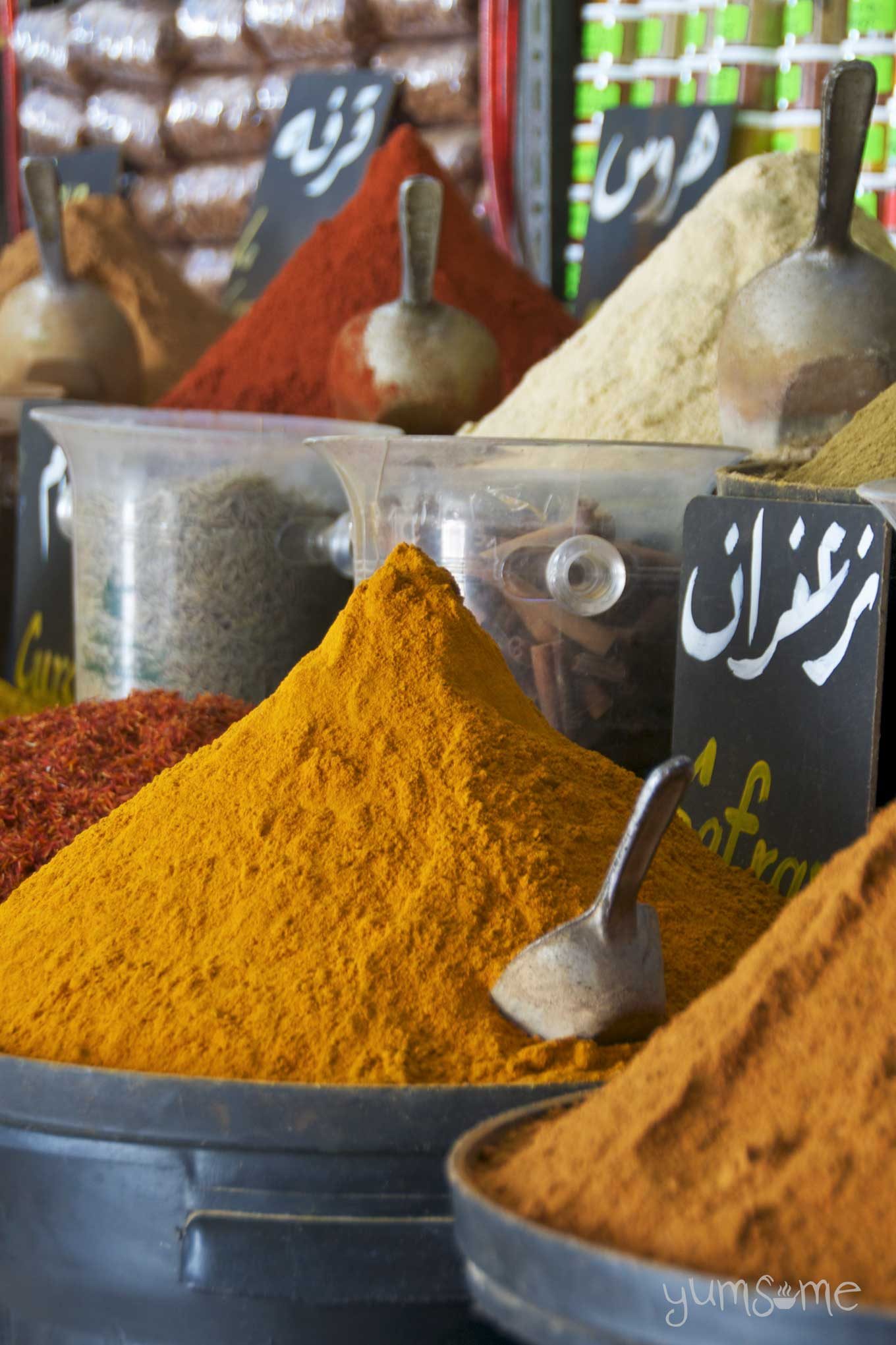 Going to the souk every day to buy just enough food for our needs, and having the chance to chat with the merchants, plus learning new words in Berber was great - we used to have such a laugh! Our regular fruit guy stopped speaking English to us, instead he taught us Berber - and sometimes Darija - and if we got confused (which happened often), he'd translate to French, in order to demonstrate the similarity between the languages. Or perhaps he just enjoyed speaking in several tongues!

Our olive seller spoke no French, no English, and no standard Arabic - just Berber and Darija; at first I didn't have a clue what he was saying... and yet, in a short while, I managed to learn certain words and phrases, and found it quite easy to communicate, albeit it very basically!

Although Morocco itself has a wide variety of dishes, in Taroudannt, there are a just few, which seem to be standard for everyone - tagine is one such dish, albeit tagine with meat. While there were some veggie tagines, sadly, they were not from the street vendors. We did find a couple of cafés though, which would make us veggie dishes for 20-30 dirham.

Like cucina povera, although there is a basic way of making vegetable tagine, there seems to be no standard recipe, so it's just a case of using what you have. The mix of veggies can be changed to suit, and if you don't have a clay tagine, then a casserole dish or large, lidded saucepan will work but you'll have to add more stock. The beauty of tagines is that their conical lids condense moisture, which mean you need to add little liquid to them. It also means all nutrients stay in the cooking.

You can also make this in a slow cooker, which works really well, but again, you'll need to add a bit more liquid.

Traditionally, in Morocco, people all eat from the same tagine, using pieces of bread to scoop out the chunks, and because the pot is made from clay, the food stays warm (remember this when you come to clear the table).

Have you ever had a vegan Moroccan vegetable tagine? 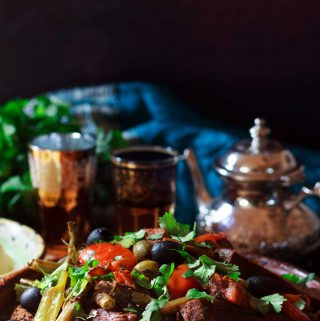 Nutrition Facts
Moroccan Vegetable Tagine
Amount Per Serving (1 portion)
Calories 320 Calories from Fat 198
% Daily Value*
Fat 22g34%
Saturated Fat 4g20%
Sodium 963mg40%
Carbohydrates 31g10%
Fiber 9g36%
Sugar 8g9%
Protein 13g26%
* Percent Daily Values are based on a 2000 calorie diet.
Did you make this recipe?Do mention @yums0me and/or tag #yums0me - I'd love to see how yours turned out!
DisclaimerMeasurements in parenthesis are approximate; it is beyond the scope of yumsome to be able to provide pinpoint-accurate ingredient quantities for every type of measuring utensil. As a guideline however, I make the assumption that: Further information may be found here

If you like this Moroccan Vegetable Tagine recipe, you'll love these other international yums!