My chunky, sweet, tangy, tomato and persimmon chutney is simplicity itself to make, and will keep for ages too. It's great to eat with cold leftovers, strong cheese, or charcuterie.

Recently, we moved back to Slovenia, where we were pleasantly surprised to discover that the Alpine winter seems to be in full swing. I kid you not, just look at all this lovely snow... Even the ducks at Lake Jasna welcomed us home! Garth and Joey are very happy to be back in Slovenia, and especially pleased to say hello to Zlatorog again!

No sign of snow in Rijeka though, although we were happy to see that the day before we left, the Christmas lights in the city centre had been switched on, and that we hadn't missed them (we feared we'd be long gone before then). Sadly, we didn't get to see them in the dark but that's OK because now we're back in Ljubljana, we get to see the seasonal illuminations in the city, which are truly magical. Recently in Rijeka however, it's still been warm enough to go out with just a big jumper on (although in the evenings it's cold enough for coats). It's definitely still autumn there! Not so up in the mountains in Žirovnica. Still, it was beautifully warm and cosy in the apartment we stayed in for a few days. Sunset as we drove up the mountains the other night. It's a bit blurry because I took it from the car window as we drove along!

I love wandering around food markets at this time of year, especially when we were in Rijeka, where the air is filled with the sweet, heady aroma of late autumn fruits, such as these pomegranates and dried figs (a speciality of the area)... 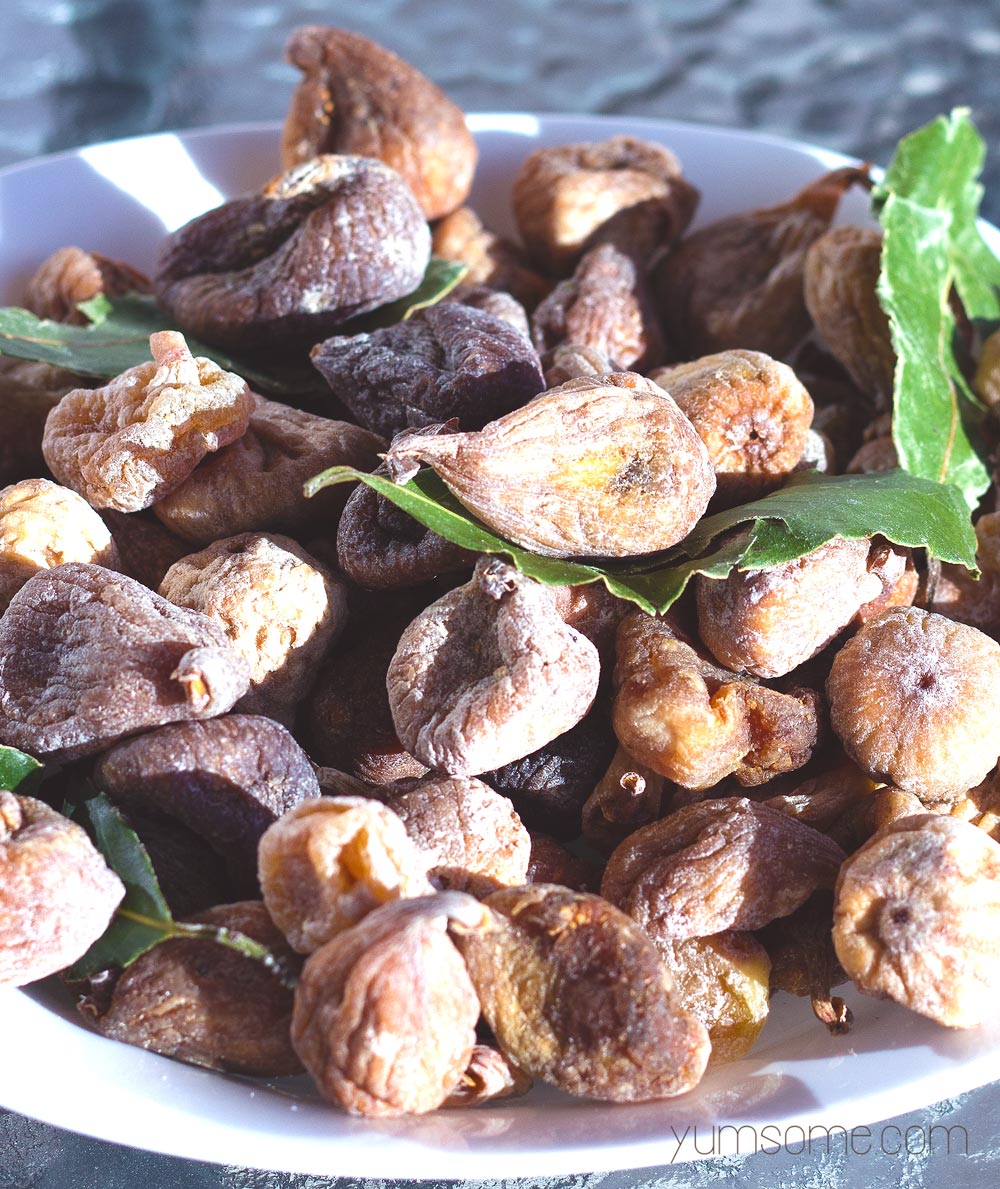 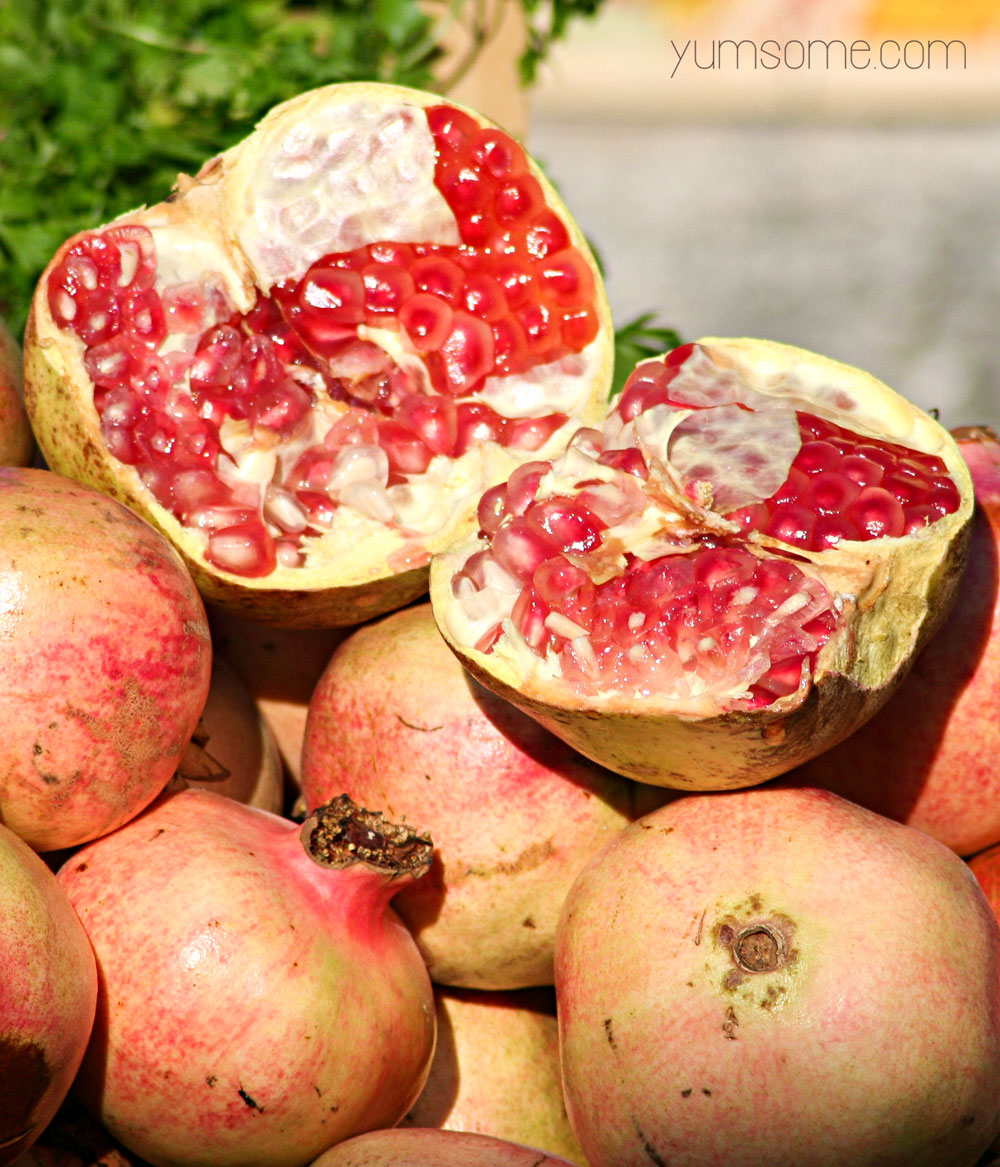 And the rich, comforting smell that's the epitome - at least for me - of this time of year... chestnuts roasting over a brazier. 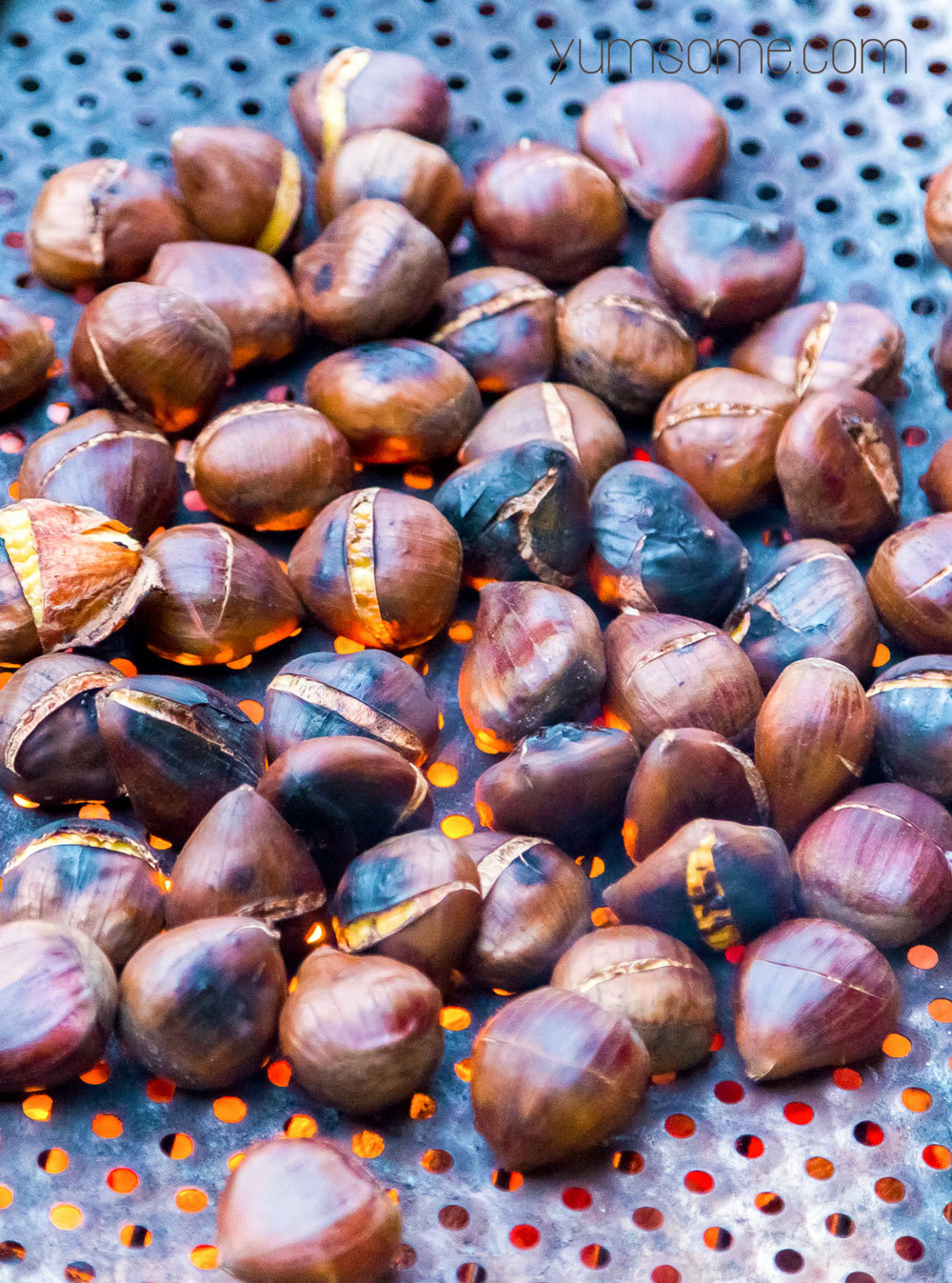 I love the smell of chestnuts roasting, don't you?

Recently, as we were perusing the goodies on offer in the market, we saw a little old woman, with a few persimmons for sale, sitting in the doorway of the dairy market.

This is nothing unusual. The market has a lot of folk who sell stuff from their gardens and allotments, or items of clothing they've made from wool from their sheep and goats. Some sell from stalls, some just put what they have on an upturned crate, and try to make a few kune. As we passed her, the woman held out a persimmon for us.

We tried to tell her, in our frankly, appalling Croatian, that we didn't want any but she wouldn't take no for an answer. In fact, given our crimes against language, we'd probably actually told her that elephants fly south during the winter. It is perhaps, not surprising that we couldn't make ourselves understood. Or maybe we could but she just ignored our protests!

Anyway, for a very old person, almost bent double, she was surprisingly spry, and managed to put several fruits into the bag that amato mio was holding. We realised then that we were on the 'losing' side, and so I tried to pay her.

Suddenly, with a hysterical cackle, she started to pat amato mio's bottom, and filled his shopping bag with everything she had left, waving away my money in the process.

In truth, there was no way we could accept her fruit, and not give her anything. I really don't know why she wanted us to have everything she had, and not take any money for it but we couldn't, in all conscience, accept such a gift. It was far too much.

For all we knew, she needed to sell those fruits in order to buy food for herself that day. Or maybe she'd been sent there by her grandchildren just to get her out of the house! Or perhaps it was just a way to have some human contact. I had no idea then, and I have no idea now.

However, I did manage to get across that it would make me very happy if she were to let me pay her. Without any warning, she threw her arms around me, pulled me down to her eye-level (which was a considerable distance, since I am almost 6ft tall, and she only came up to my waist), said something which I didn't understand, gave me a huge kiss, and hugged the life out of me. There were tears in her eyes.

Again, I know not why. But she was smiling, and seemed incredibly happy.

Then she continued with the patting of my beloved's rear.

When we got home, I discovered that she'd put 11 fruits in the bag. I really didn't think I'd given her enough money, so decided to make some chutney, and take her a jar to say thank you. Unfortunately, we were unable to find her again, so I hope she was at home, sitting by the fire.
Still smiling.
Still laughing.
Still patting the bottoms of handsome men.

(By the way, persimmons are called 'dragun' in Croatian - how cool is that?!)

As wonderful as it was to receive such fantastic bounty, I am unable to eat raw persimmons, due to the effect they have on my throat. I have the same issue with mangosteens, and to an extent, with pineapples too (which also burn my tongue, especially if they're not quite ripe). I also have issues with raw celery. It makes my tongue go numb.

Cooking seems to either destroy or alter the enzyme(s) responsible for my less than favourable reactions, so I decided to make some tomato and persimmon chutney. And since there is such an abundance of locally-grown fruit and vegetables in Rijeka, I also used semi-dried figs, plus onions and tomatoes, which another old lady assured me were, "Domaći! Domaći!" (locally-grown).

I really love how much pride people in this part of the world take in their local produce - and quite rightly so. It seems as though I've spent my life telling people that there is no substitute for home-grown (and home-made) food, and for the past few years, I've been privileged to live in places where so many people agree with me!

This chutney really doesn't need any fancy ingredients but you will need to have some sterilised jars and lids. See my zacuscă recipe for sterilising tips.

How to make chutney

It's a shame we couldn't find our fruity benefactor again but I hope that when we return to Rijeka later this year, we'll see her once more. Someone who did appreciate my tomato and persimmon chutney however, was our friend, Hrvoje. Apparently, his friends did too because they visited him the other evening... and scoffed the lot!

He's been asking me ever since for the recipe so he can make some more. So Hrvoje, my friend, this is for you... but tell your friends if they want more chutney, they have to make their own!
Dobar tek! 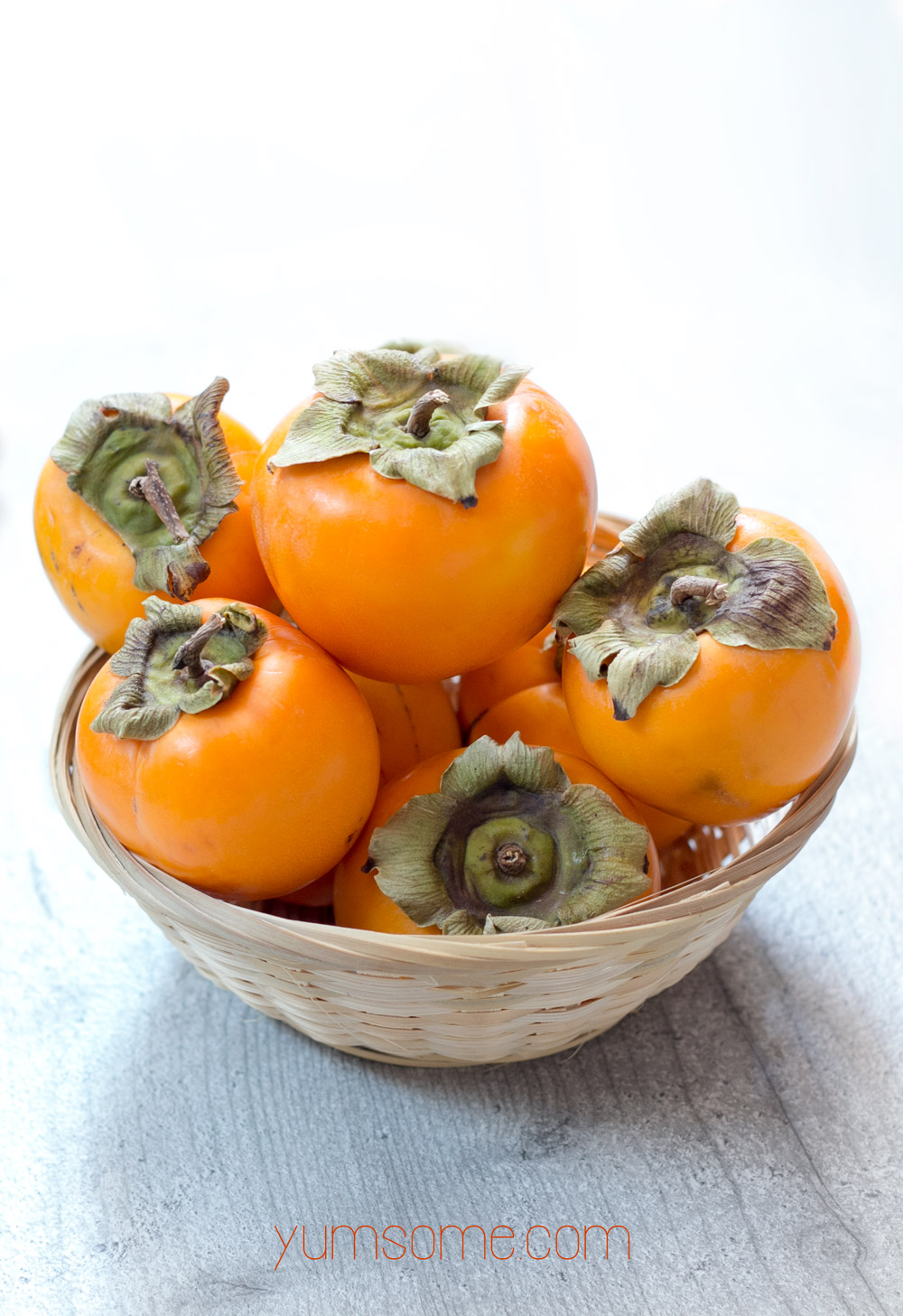 Fresh persimmons from a little old lady in Rijeka! You will also need:

Nutrition Facts
Easy Tomato and Persimmon Chutney
Amount Per Serving (50 g)
Calories 115
% Daily Value*
Sodium 2mg0%
Carbohydrates 29g10%
Fiber 1g4%
Sugar 21g23%
Protein 1g2%
* Percent Daily Values are based on a 2000 calorie diet.
Did you make this recipe?Do mention @yums0me and/or tag #yums0me - I'd love to see how yours turned out!
DisclaimerMeasurements in parenthesis are approximate; it is beyond the scope of yumsome to be able to provide pinpoint-accurate ingredient quantities for every type of measuring utensil. As a guideline however, I make the assumption that: Further information may be found here