No Christmas feast is complete without a slice of rich and fruity Christmas pudding. Not only is it super-easy to make from basic store cupboard ingredients, it can be made well in advance, and stored for up to a year!

In half a minute Mrs. Cratchit entered – flushed, but smiling proudly – with the pudding, like a speckled cannon-ball, so hard and firm, blazing in half of half-a-quarter of ignited brandy, and bedight with Christmas holly stuck into the top.

Ask any English person to name traditional Christmas fare, and they'll almost certainly say Christmas pudding. Some (hello!) might even argue that it's not a proper Christmas dinner without the pudding.

Of course, there are some misguided folks (hello, amato mio!), who claim not to enjoy the cosy and comforting deliciousness of the 'speckled cannon-ball'. To them, fie I say, fie!

Humbugs, one and all - Christmas pudding is beyond delicious! How could anyone not love that comforting concoction of fruit, spices, and rich, dark pudding, served warm and drizzled with cream?

The Christmas puddings of my childhood were magical, and, to my young eyes, looked just like something from a Dickens novel. They were always served flaming and topped with a sprig of holly, thus giving credence to my grandfather's favourite mantra, "If it's worth doing, it's worth doing well"!

When we were ready for the pudding, my grandparents would disappear off into the kitchen, where, one assumes, Granddad would ignite the brandy. I always imagined that festive pyromania was Granddad's special Christmas job!

A few minutes later, he and Gran would then re-enter the dining room, carrying the flaming Christmas pudding between them, singing,

Yes, they changed the final line, and without fail, would burst into fits of laughter as they finished the carol. My grandparents had a wonderful sense of humour!

Mix the Pudding, Make a Wish!

My special Christmas job was to mix the Christmas pudding. I loved the times when my grandmother let me cook with her, and none more so than in preparation for Christmas.

December hailed the start of our festive preparations, and by the time the decorations went up during the weekend before Christmas Day, we were all set for the big day.

As well as Christmas pudding, we (and by 'we', I actually mean, Gran with a little bit of help - or possibly hindrance - from me) had made Christmas cake, Dundee cake, shortbread, and mincemeat.

My gran also made her own marzipan, and a couple of days before Christmas, we'd sit at the kitchen table, making marzipan fruits. I suspect the reality of how they looked is far less perfect than I remember!

As tradition dictates, once I'd thoroughly mixed all the Christmas pudding ingredients together (along with a silver sixpence, which, rather miraculously, always seemed to end up on my plate!), we all took a turn in stirring the mixture, making a wish as we did so. After that, Gran would cover the mixing bowl with a clean, damp tea towel, and put it in the pantry overnight. The next day, I'd give it another stir, and then it was put into a pudding basin lined with muslin, tied off at the top, and thence into the boiling pan for the best part of the day.

After a few hours, the smell coming from the kitchen was so tummy-rumbling delicious. To this day, it's Gran's kitchen I am transported to when I cook my own Christmas puddings!

These are also names for Christmas pudding, yet neither contain plums! Between the middle of the 17th century, up until around the 19th, in England, the 'plums' in plum pudding and plum cakes were actually raisins.

Prior to this, raisins were called 'resons'; I don't know why this name fell out of favour, and why resons became known as plums. I'm guessing though, that 'raisin' was reinstated during the 19th century as part of the Victorian fondness for embracing and resurrecting the past (e.g. Gothic architecture, Latin, tartan, etc.).

I can say with all certainty though, that plum pudding as we know it has been around since at least 1714. I have many old cookbooks with recipes for 'plumb-pudding', and they're really not that different from today's Christmas pud.

As far as I know, the first time it's referred to as Christmas pudding is by Eliza Acton, in her 1845 book, 'Modern cookery, in all its branches; reduced to a system of easy practice for the use of private families.'  Pre-dating Mrs Beeton by a couple of decades, Eliza's book makes for fascinating reading. There are plenty of copies available to read via the Wayback Machine.

Contrary to the popular Christmas carol, figgy pudding is actually nothing like Christmas pudding, and only appears in the song, I suspect, because it scans better than plum pudding!

In the 1390 recipe collection, The Forme of Cury, there's a recipe for 'fygey' pudding, which is a boiled dish of ground blanched almonds mixed with water, wine, dried fruit, spices, and honey:

There is a later recipe, from a 15th century herbal (a collection of recipes and general remedies), which bears slightly more resemblance to the Christmas pudding we all know and love today. It's possible that 'our' beloved English Christmas pudding is an evolution of the following receipt. (Not a typo - receipt is the old-fashioned word for recipe!)

As with the recipe above, figs are boiled in wine, and mixed with spices and raisins; however, in this recipe, in between these steps, the softened figs, along with stale bread, are made into a rough paste. Once everything is mixed together, it's boiled, and then decorated with pomegranate seeds when served. I imagine it would be something like a cross between bread pudding and a less sweet Christmas pudding.

How to make Christmas Pudding

You'll need to start this pudding the day before you plan to steam it; however, it can be made up to a year in advance!

Remove the parchment and foil, then gently slide a palette knife around the inside of the basin to release the warm Christmas pudding. Turn out onto a plate.

If you're keeping things traditional, place a sprig of holly on top of the pudding, and then warm a few tablespoons of brandy in a ladle over a flame. Once the brandy is hot, carefully set light to it (long matches are ideal for this), and then pour over the Christmas Pudding. Once the brandy has burned itself out, serve the pudding.

Because several family members, including amato mio, are teetotal or too young to have alcohol, I don't bother with the flaming brandy step, and just serve the Christmas pudding as it is.

It's traditional to eat Christmas pudding with brandy or rum butter, brandy or rum sauce, or custard. All of these can easily be made vegan, and plant-based creams are widely available, too, for those of us who prefer something less rich. Vegan squirty creams also work well, and are fun for the kids!

As I mentioned earlier, Christmas pudding can be stored in a cool place for up to a year. Make sure it's well-wrapped so that no air can get in.

To make this Christmas Pudding gluten-free, simply swap the breadcrumbs and flour for your favourite gluten-free alternatives, and add a pinch of baking powder too. If you can't find gluten-free stout, use strong tea instead.

Lastly, some vegetable suet contains wheat flour, so do check the label. Vegan suet tends to be gluten-free. (The point of the flour is to stop the pellets smooshing together.) My favoured ones are from:
Buy Wholefoods Online
Suma

Why not try these other vegan Christmas recipes?

Serve this Christmas pudding warm with some non-dairy cream, brandy or rum butter, brandy sauce, or even custard! The most important accompaniment for Christmas pudding, though, is being surrounded by the love of your family and friends! 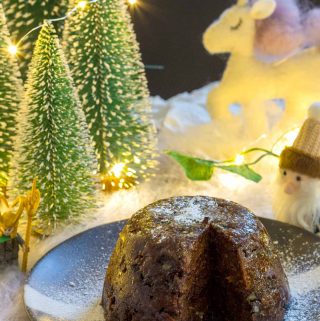 No Christmas feast is complete without a slice of rich and fruity Christmas pudding. Not only is it super-easy to make from basic store cupboard ingredients, it can be made well in advance, and stored for up to a year!
Print Pin Rate
Course: Dessert
Cuisine: English
Prep Time: 20 minutes
Cook Time: 4 hours
Makes (slide to adjust): 12
Calories: 234kcal
Author: Nico

Nutrition Facts
Vegan Christmas Pudding
Amount Per Serving
Calories 234 Calories from Fat 54
% Daily Value*
Fat 6g9%
Saturated Fat 2g10%
Sodium 103mg4%
Potassium 354mg10%
Carbohydrates 41g14%
Fiber 3g12%
Sugar 28g31%
Protein 3g6%
Vitamin A 309.1IU6%
Vitamin C 5.2mg6%
Calcium 56.5mg6%
Iron 1.4mg8%
* Percent Daily Values are based on a 2000 calorie diet.
Did you make this recipe?Do mention @yums0me and/or tag #yums0me - I'd love to see how yours turned out!
DisclaimerMeasurements in parenthesis are approximate; it is beyond the scope of yumsome to be able to provide pinpoint-accurate ingredient quantities for every type of measuring utensil. As a guideline however, I make the assumption that: Further information may be found here
Pin75
Share28
Tweet
Share
WhatsApp
Email
103 Shares
« Vegan Stuffed Seitan Roast
Quick and Easy Vegan Palak Paneer »
Protected with PIXSY