Warming and filling, simple and frugal, and a complete meal in one bowl - you can't go wrong with my traditional, veggie-packed pasta fagioli (aka pasta fazool). Like so much cucina povera, this Tuscan pasta and bean soup (or minestra di pasta e fagioli to give it its northern Italian name), has as many variations as there are villages in Italy!

Despite pasta fagioli hailing from Tuscany, minestra is actually Venetian dialect for soup, while zuppa is Italian. Zuppa is generally a smooth or puréed soup, while minestra is a more substantial broth with bits in.

BTW, minestra has the same root as ‘minus’, as it was originally deemed the food of servants (minor people- i.e. those of a lower status). In Roman times it was known as ‘minestrare‘ – "that which is served/those who serve". It's where we get the modern verb, to minister. And hence, minestrone is food given to the servants.

When the stars make you drool,
Just like pasta fazool,
That's amore!

You may be more familiar with pasta fazool than minestra di pasta e fagioli! Fazool seems to be an Americanisation of various Italian dialects for bean; fasul (Napoli), or fasulu (Sicilia).

In Venezia, it's faxiolo, and in Slovenian, it's fižol, which is not surprising, given how close Slovenia is to Friuli-Venezia Giulia. And yes, former Yugoslavian countries all have a version of pasta fagioli! The Serbs simply call it posni pasulj (fasting beans), on account of it being consumed during the Great Lent.

In Croatia, pasta fagioli is known as pašta fažol, although in the Dalmatia region, it's called pašta i važoli. Again, it's not surprising, given that Dalmatia was actually Venetian for almost 400 years. (And of course, a Roman province, too for a few centuries!)

We used to live in Rijeka (Croatia), where some people still speak a version of Venetian, called Fiumano, and I often came across familiar words while shopping at the market!

(Rijeka and Fiume mean 'river' in Croatian and Italian, respectively.)

Incidentally, Rijeka has actually changed hands so many times during the past century, that my friend, Ester's grandmother, who was born in Rijeka in 1920 (when it was a free state), used say;

If I came to life only one year earlier I would have had 6 citizenships in my life, without ever moved from here. If people from democratic countries would see all of my passports, they would think I am a bandit with fake documents!

Variations on a theme

While essentially a vegetarian dish, I have known friends to add leftover cuts of meat to pasta fagioli. I sometimes add sliced vegan sausages, which makes this soup even more filling.

If I have some tomato sauce in the fridge that needs using up, it's also been known to make its way in. Some folk I know swear by using broth only, while others like it more tomato-based. In general, I do prefer my pasta fagioli brothy.

Although there is a basic premise that it must have pasta and beans, and start with soffritto, there is no one right way of making this soup - just use what you have in the kitchen.

This is not a soup that requires you to go out and buy special ingredients - it's one to use up less-than-perfect veggies, those bits of broken pasta left in the bottom of the jar, and any broth or sauce you may have hanging around.

As such, this pasta fagioli recipe is akin to the Pirate Code - more a set of guidelines! 😉

How to make pasta fagioli

- Once you've made your soffritto, add the broth, bring to the boil, and then simmer for five minutes.
- Add half the beans and all of the tomato, mash the remaining beans, then add to the soup, along with the pasta, kale, and parsley.
- Give it a good stir, and then continue to simmer for another 8-10 minutes, until the pasta is al dente.
- Turn off the heat, and skim the soup to remove any froth, then serve with a grind of black pepper. And a chunk of fresh bread if you feel so inclined!
- If you want, you could add a few slices of vegan sausage during the last five minutes of cooking, and finish with a little of my parmesan when you serve up.

If you like my pasta fagioli, check out these other vegan Italian recipes! 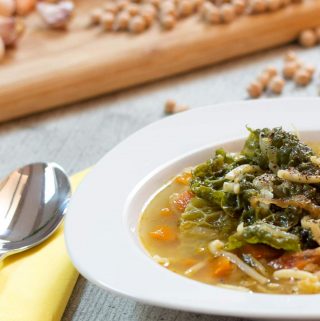