High in taste and low in effort, this Sicilian caponata is a rich and piquant eggplant stew that's full of nourishing vegetables and fragrant herbs. Serve it on its own with rustic bread, or as part of a larger meal, and you won't go far wrong! 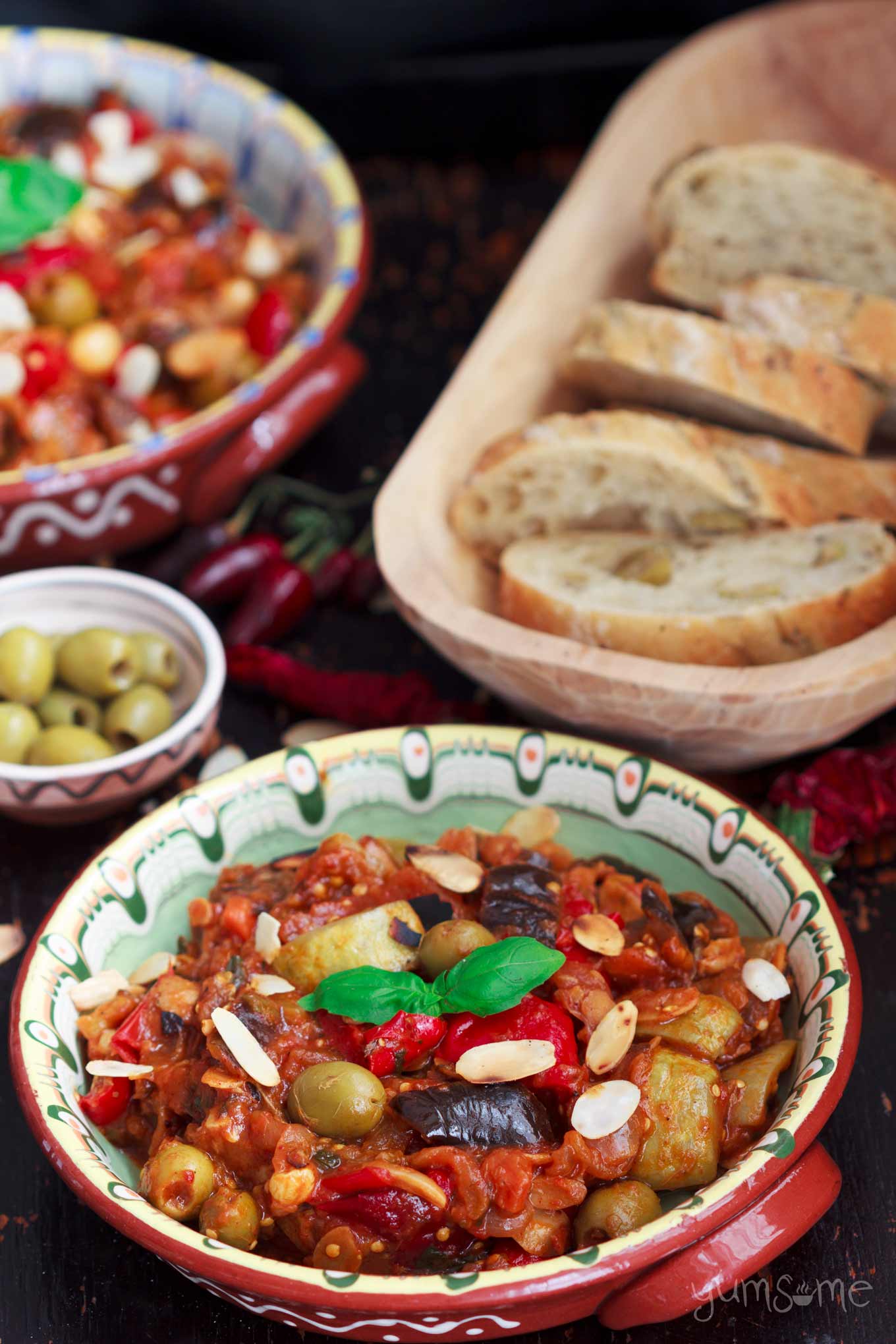 “Would you write me a recipe for Sicilian caponata?” asked my BFF, as we sat drinking Bullfrog cocktails in the Che Guevara bar in Cluj. “Of course,” I replied.

And promptly forgot. I am such a rubbish friend at times. Or maybe it’s just that those Bullfrogs were powerful mean drinks. Fortunately, I came across a note on my iPad that I’d written in the bar to remind myself; “Make caponata for Sue, idiota!” So here you are, my darling friend - enjoy! 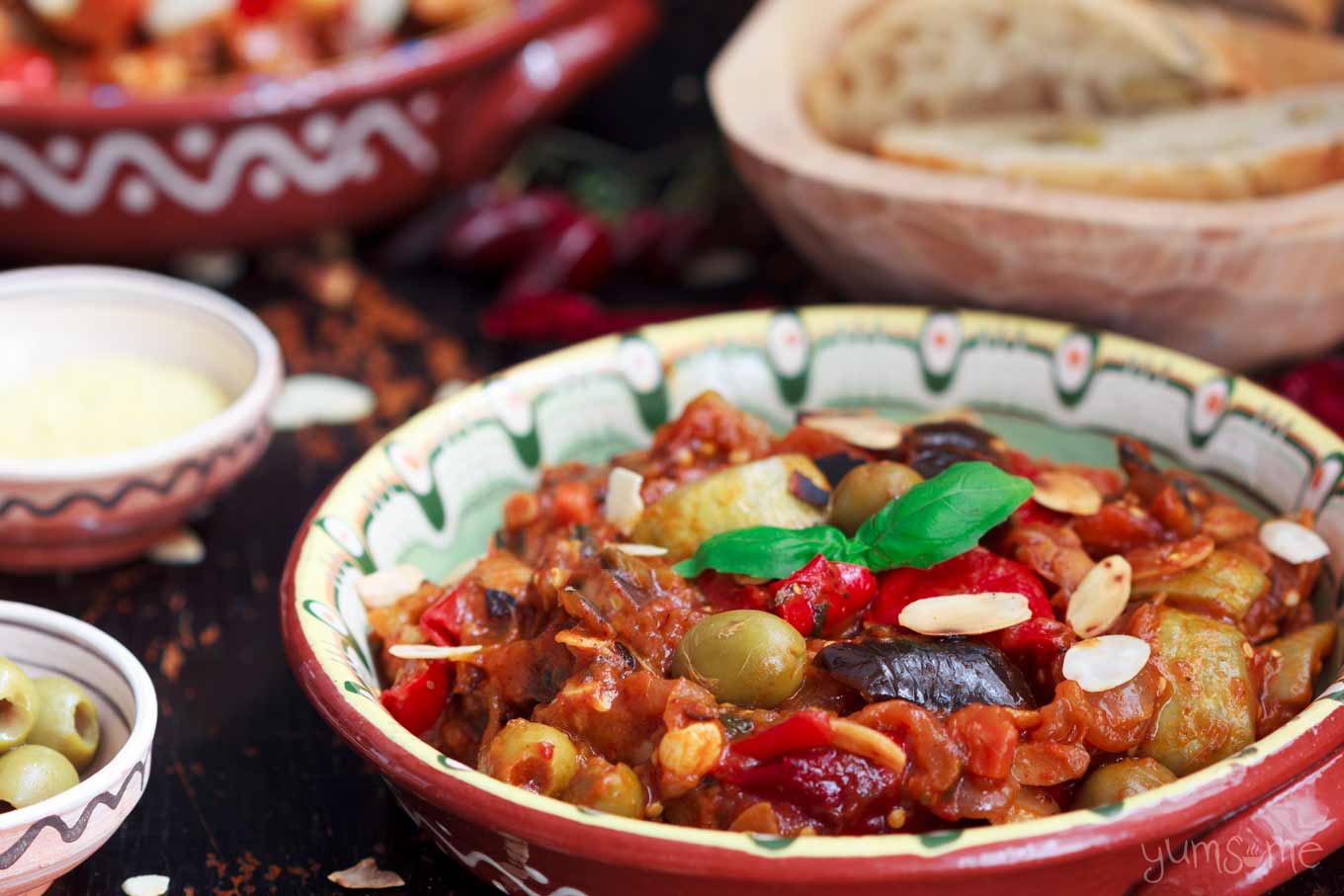 Many people seem to be under the misapprehension that Italy doesn’t do ‘naturally’ vegan food but really, nothing could be further from the truth. Due to its favourable climate, Southern Italy grows most of the produce for the entire country.

It stands to reason, therefore, that veggie dishes abound, especially ones which use up end-of-season fruits and vegetables. No one is going to let a few under-sized aubergines or carrots, or barely-ripe tomatoes go to waste! Vegetable stews are big in Southern Italy; Sicily, for example, has caponata, while in Pozzuoli in Campania - where I lived a few years ago - we had cianfotta (pronounced chi’an-fo-tuh). Both are very similar, and consist of a mélange of vegetables, herbs, and spices, slow-cooked in order to extract max flavour with the minimum of effort. 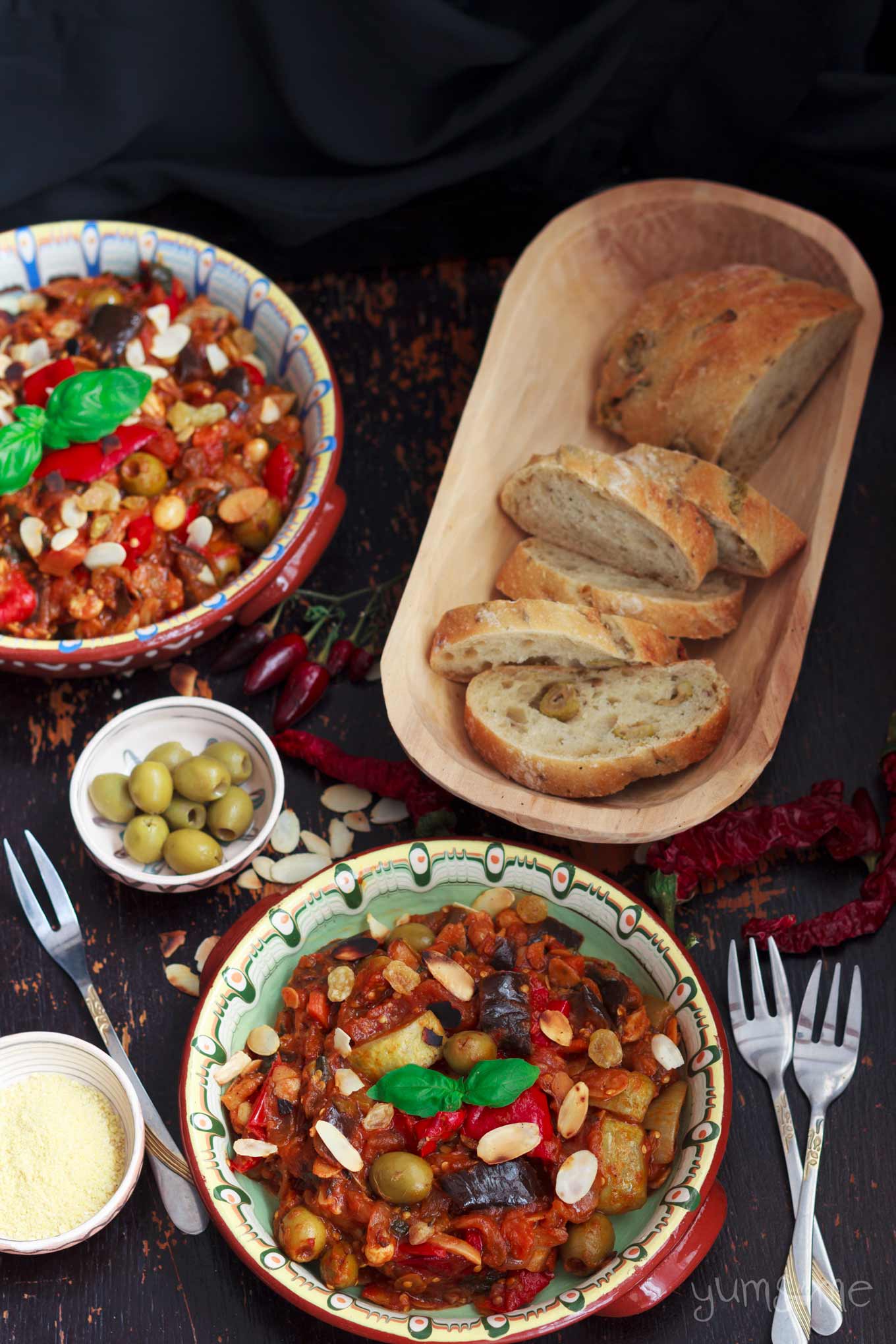 Caponata is yet another a wonderful example of cucina povera - simple, frugal cooking... the cornerstone of almost everything I make. Like other Italian dishes, its success relies not on complicated methods and hours spent slaving over a hot stove but rather on good-quality ingredients and a bit of know-how. As such, caponata does not really have one definitive recipe, instead, it’s a case of using what you have, and every household has its own way of making this wonderful dish. The very essence of cucina povera. And of the late, great Carluccio’s mantra, “MOFMOF” - minimum of fuss, maximum of flavour!

Of course, there are a few ‘rules’ you should follow when making caponata. It should have aubergine (eggplant), onion, garlic, tomatoes, and chilli. And as with Thai cooking, there should be a flavour cycle. In this case; sweet, sour, salty, hot. Traditionally, the eggplant is fried before stewing; however, because I prefer to use less oil, I steam it. It takes around 5-7 minutes (depending on the size of the chunks you cut your eggplant into), and loses none of its flavour. By all means fry the eggplant if you wish but I can honestly say that having made caponata scores of times, both by frying and by steaming, it makes absolutely no difference to taste or texture.

Do eggplants need to be salted?

I'm aware that there are people who claim you must always salt eggplants before cooking but I'm not one of them. As I've spoken about before, in Europe we do not have bitter eggplants, so there's no need to salt, no matter their size. Similarly, Asian eggplants shouldn't ever need to be salted. However, if you live in a place where large eggplants can be bitter, then by all means, salt them for 30 minutes while you make the soffritto. Or just use small ones! 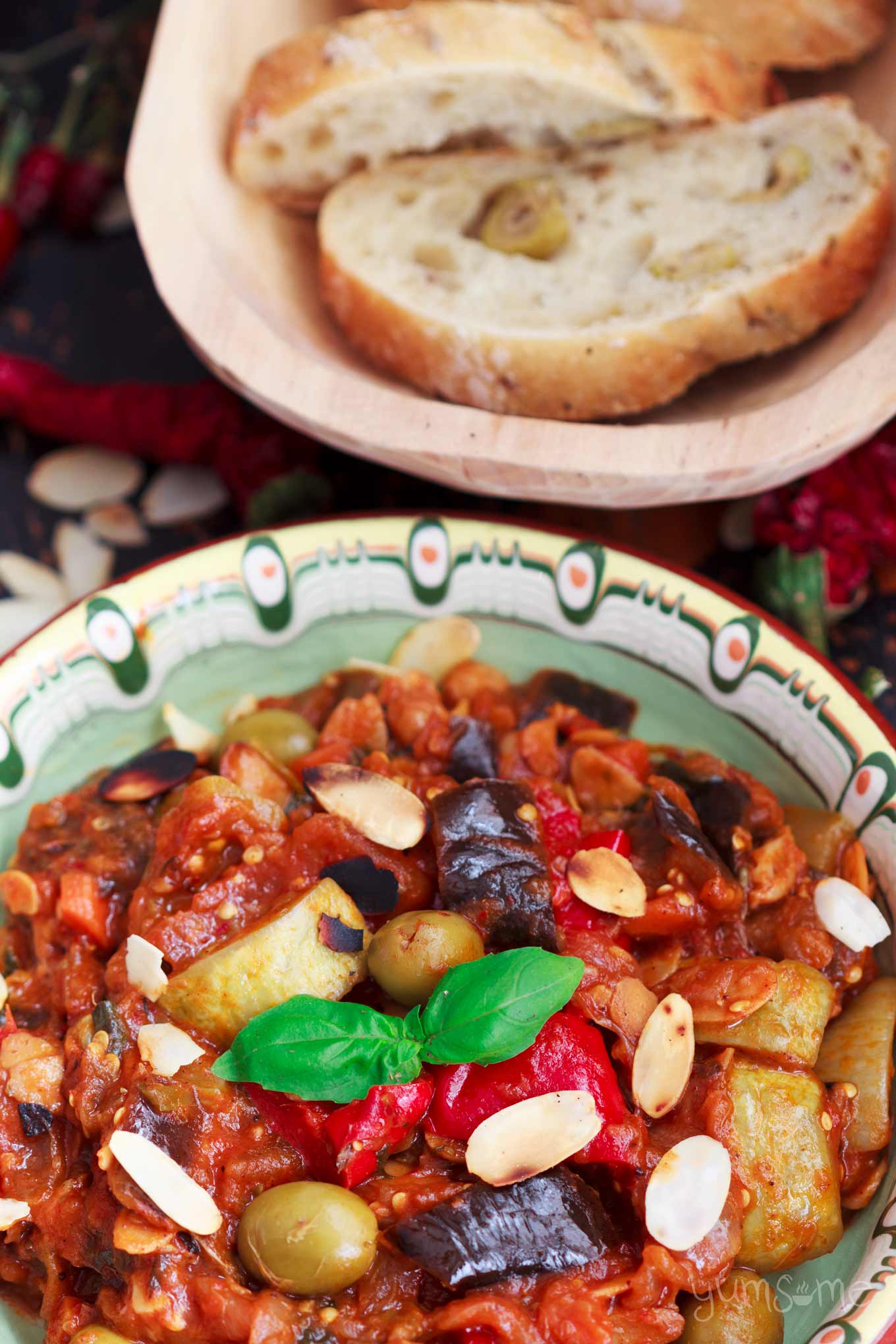 Because of Sicily’s Maghreb Berber heritage, caponata shares many similar qualities to the tagines of Morocco... or Berber mamita.** Lots of veggies, plus olives, capers, dried fruit (in this case, sultanas), almonds, and herbs all find their way into the pot.

**Mamita, by the way, is basically the same word as the French marmite (mar-meet) - a type of stew pot, and by extension, the stew within. Brits will be very familiar with Marmite jars, which are shaped to resemble the marmite.

Some folk add courgettes (zucchine) and Romano peppers to caponata - I do if I have them - and some don’t. It’s up to you. My usual list of ingredients goes like this;

I really don’t advise using green peppers though. In addition to being the food of Satan, they will impart a bitter taste, which is not what you want in your caponata. The flavours should be balanced and harmonious, and work together. Like Tony Stark, green peppers just don’t play well with others!

While caponata is a really easy dish to make, you do nevertheless need to have patience (Roma non fu fatta in un giorno!) - caponata cannot be rushed. If you try to cut corners, you'll end up with something thin and insipid.

Like good wine and the best relationships, this caponata needs time to mature. However, most of it is hands-off time, which leaves you free to watch an episode of Two Greedy Italians, sing an aria or three, or curl up with a good book and a glass of Barolo!

Don't believe any blogger who tells you that you can make proper caponata in half an hour. They are more concerned with page views than giving you accurate information and a recipe that actually works!

Also, although it can be eaten on the same day, caponata is so much better when left for a day for the flavours to really develop. 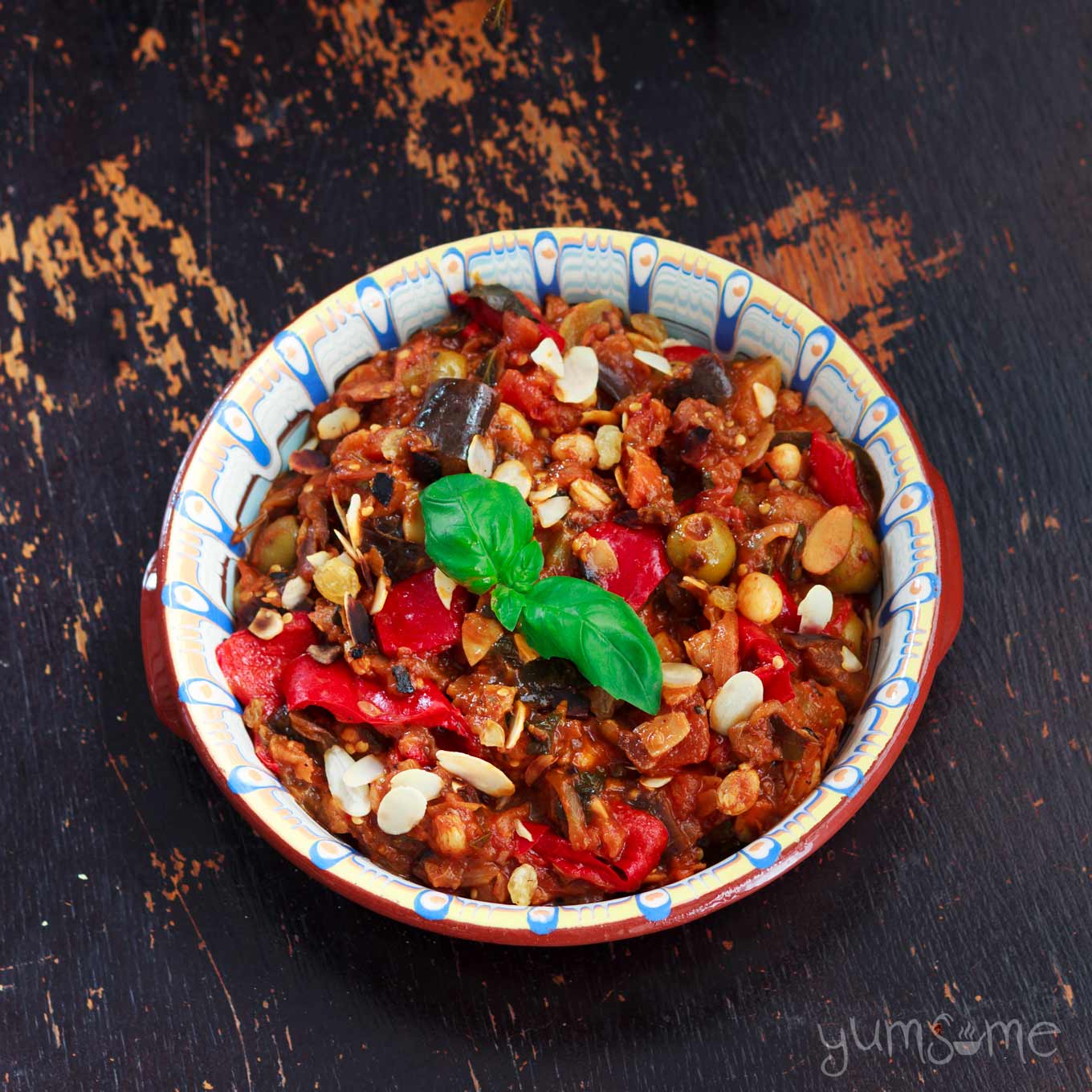 What to serve with caponata

Traditionally served at room temperature with some fresh pane casareccio (a type of home-made sourdough bread), this caponata is a delicious meal in its own right. You could also have it with or ciabatta or focaccia.

It’s also great as a starter, or even piled onto crostini or small polenta rounds as an appetiser. Caponata is fab on toast, too! Pancia mia fatti capanna  - buon appetito!

Do check out these other Italian yums! 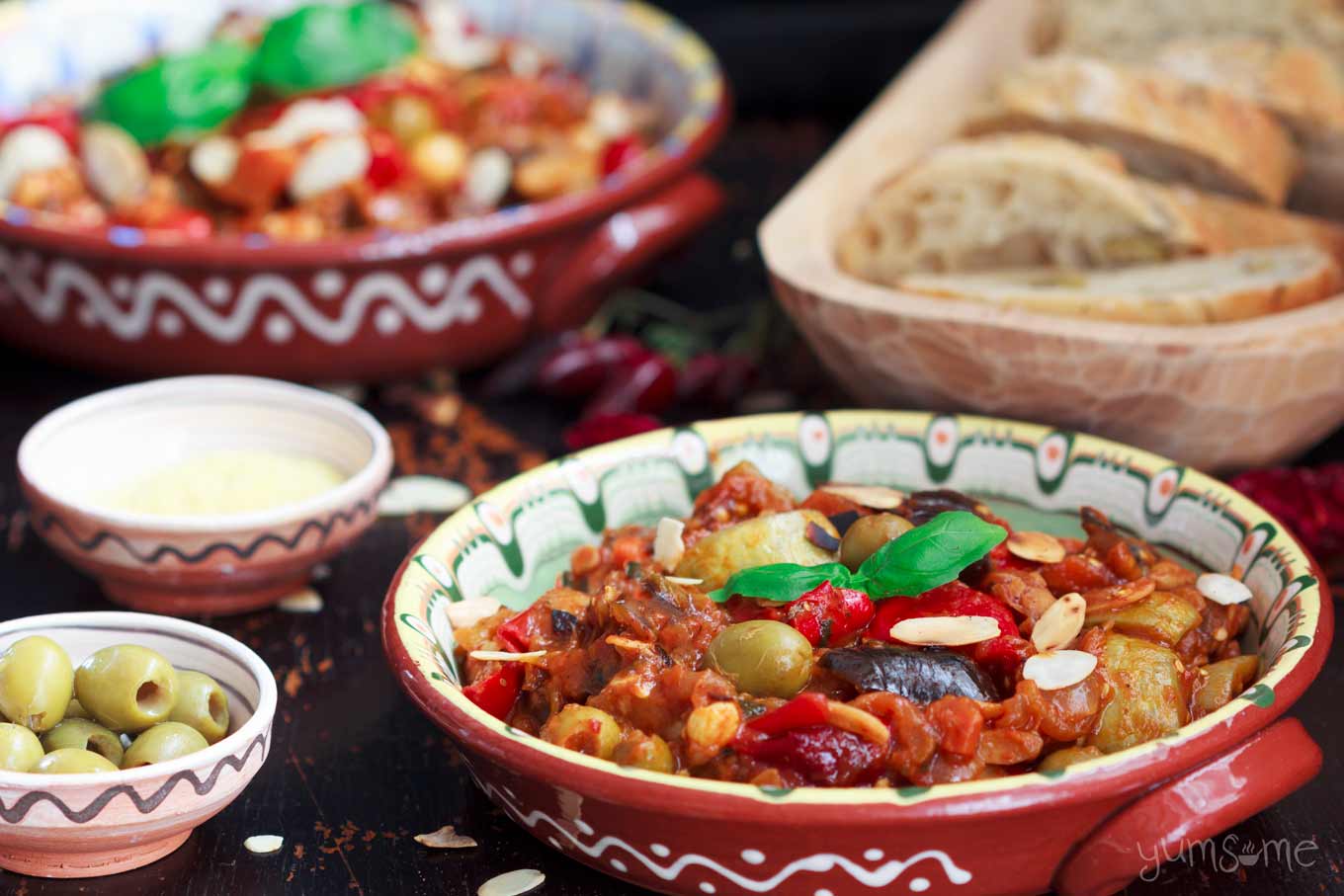 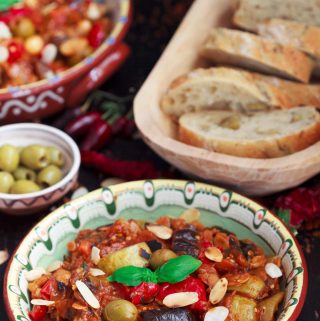 How To Make Sicilian Caponata

Nutrition Facts
How To Make Sicilian Caponata
Amount Per Serving (1 portion)
Calories 290 Calories from Fat 189
% Daily Value*
Fat 21g32%
Saturated Fat 3g15%
Sodium 348mg15%
Potassium 680mg19%
Carbohydrates 26g9%
Fiber 7g28%
Sugar 16g18%
Protein 5g10%
Vitamin A 3738.54IU75%
Vitamin C 66.52mg81%
Calcium 75.45mg8%
Iron 1.91mg11%
* Percent Daily Values are based on a 2000 calorie diet.
Did you make this recipe?Do mention @yums0me and/or tag #yums0me - I'd love to see how yours turned out!
DisclaimerMeasurements in parenthesis are approximate; it is beyond the scope of yumsome to be able to provide pinpoint-accurate ingredient quantities for every type of measuring utensil. As a guideline however, I make the assumption that: Further information may be found here 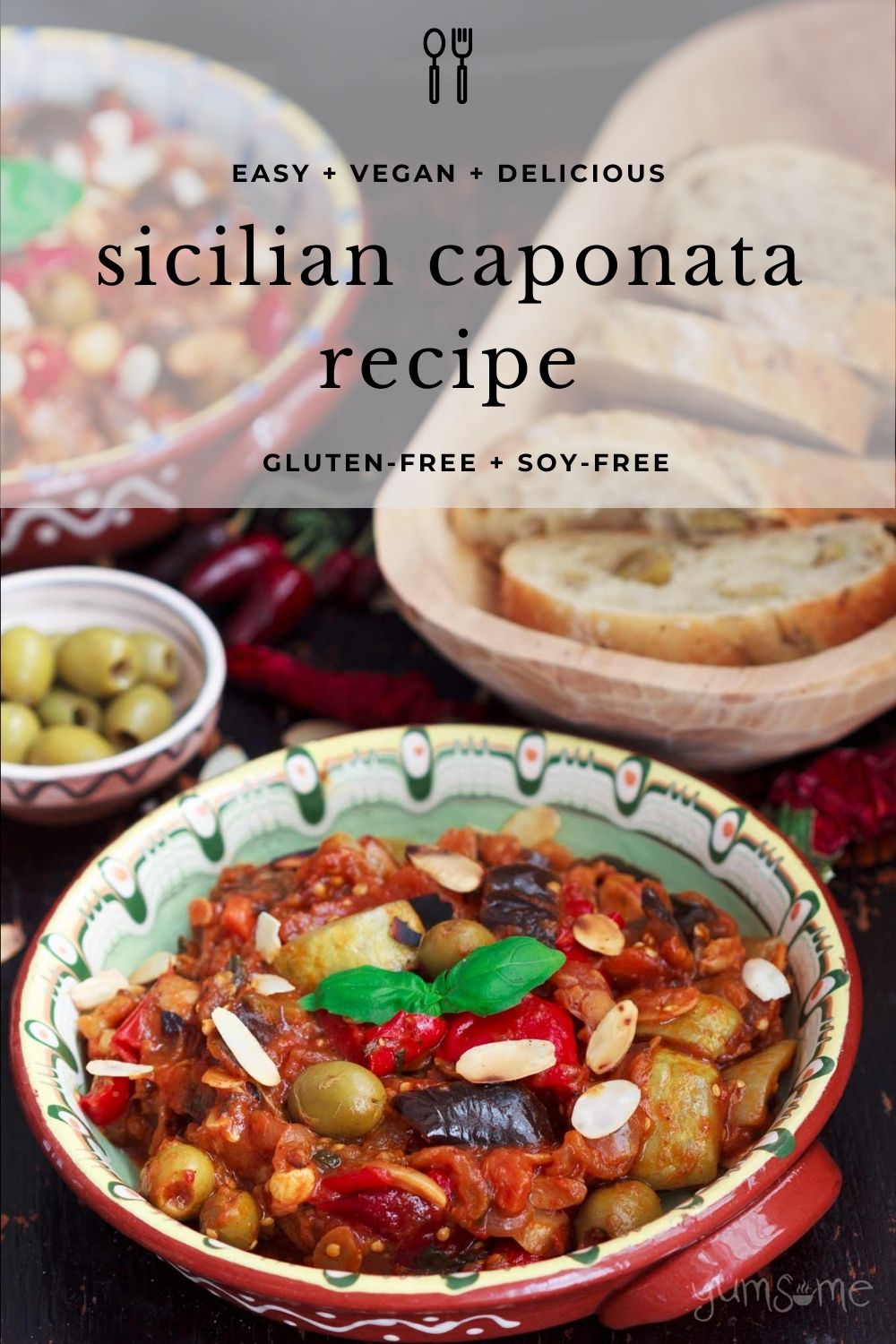